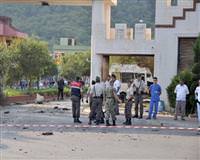 Two were injured in the blast, including a specialist sergeant with the gendarmerie. According to the information obtained, the blast took place at 16:00 yesterday at the main entrance to a paramilitary post after the bomber first attempting to enter the building.
A passing midibus was totaled in the blast and the driver injured. Both of the wounded were taken by ambulance to local hospitals. According to the Antalya District Police Chief Ali Yılmaz, the cause for the explosion was not yet evident nor was the identification of the suicide bomber who was killed in the explosion.