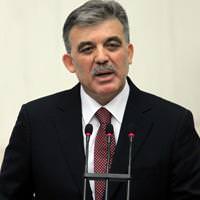 President Abdullah Gül urged Turkish lawmakers at the opening session of parliament on Saturday to search for consensus on a new liberal constitution so it would be representative.

Pro-Kurdish deputies ended their boycott of parliament to remove a threat to Prime Minister Tayyip Erdoğan's plans to rewrite a constitution drafted after a 1980 military coup. Erdoğan's AK Party won a third consecutive term in June and he wants to draft a new constitution, with the opposition's support, by the first half of 2012. "All segments of the Turkish population, without any exception, have the will for a new constitution," Gül said
"Because everyone is uneasy about the current constitution which does not meet our people's requirements, restricts Turkey's democratic diversity and ignores Turkey's assets. "Our people entrusted MPs with the duty and the honour of preparing a new constitution on the basis of the people's will for the first time since the constitutions of 1921 and 1924. The new constitution should have flexible and liberal characteristics. Lawmakers should refrain from escalating tension between the state and its people in defense of different political tendencies."
The issue of greater rights for Turkey's minority Kurds is likely to dominate the debate in the parliament of the European Union candidate country. It could spark a nationalist backlash because Kurdish rebels fighting a three-decade insurgency have recently stepped up their attacks.
Another potentially divisive issue is the relationship between religion and the state. "It is impossible to ignore the fact that the current constitution is the source of many social problems. Our country needs a new constitution based on social compromise," parliament's speaker, Cemil Çiçek, said in his opening remarks.
Analysts say a new constitution will aim to address the demands of the Kurdish minority and consolidate the civilian government's oversight of the military, reforms long demanded by the EU to modernize the Turkish state. Erdoğan is widely believed to want to change Turkey's parliamentary system into a presidential one, a proposal opposed by all opposition parties. Deputies of the pro-Kurdish Peace and Democracy Party (BDP), the largest party representing the Kurdish minority, took the oath to end their boycott, prompted by court rulings barring some jailed elected candidates from taking their seats. Chief of staff General Necdet Özel was also present
Turkey's army has a long history of intervening in politics and has ousted four elected governments. However, Erdoğan has curbed the army's powers while pushing through EU-backed reforms to strengthen democracy. Any constitutional reform would need to be approved in a referendum.