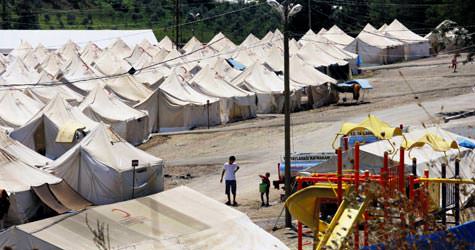 Prime Minister Tayyip Erdoğan said on Tuesday he would set out his country's plans for sanctions against Syria after he visits a Syrian refugee camp near the border in the coming days, stepping up pressure on President Bashar al-Assad.

The move heralds a further deterioration in previously friendly relations between Ankara and Damascus since the start of Assad's crackdown on protesters.
"Regarding sanctions, we will make an assessment and announce our road map after the visit to Hatay, setting out the steps," Erdoğan told reporters, adding he expected to visit the region on October 9th. Some 7,000 Syrians have taken refuge in camps established in Hatay, having fled the violence at home.
Erdoğan said last month that Assad would be ousted by his people "sooner or later" and warned that Syria could slide into a sectarian civil war between Alawites and Sunnis.
At least 2,700 have been killed in the crackdown in Syria, according to a U.N. count. Demonstrators have begun to demand some form of international protection that stops short of Libya-style Western military intervention.