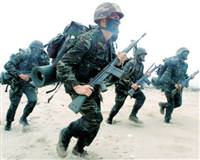 Turkey’s military will conduct an exercise in the southern province of Hatay, where more than 7,000 Syrians have taken refuge from Syrian President Bashar al-Assad’s security forces.

The Oct. 5-13 "mobilization" exercise, announced on the military's website on Tuesday, may coincide with a visit that Prime Minister Tayyip Erdoğan is expected to make to refugee camps in Hatay after he returns from South Africa this week.
The army said the exercise would involve the 39th mechanized infantry brigade and 730 reserve soldiers.
Turkey's once-close relations with Syria have soured as Erdoğan has fiercely criticized Assad's crackdown on protesters, urging him to end the bloodshed and enact reforms.
Syria has a longstanding territorial claim to Hatay province, but had put this on the back burner in recent years, when Erdoğan and Assad cultivated close ties.
Erdoğan said last month that Assad would be ousted by his people "sooner or later" and warned that Syria could slide into a sectarian civil war between Alawites and Sunnis.
Most Syrians, like most Turks, are Sunni Muslims, while Assad is from the minority Alawite Muslim sect.
Ankara, which has already imposed an arms embargo, has said it is preparing further sanctions against the Syrian government.
The Hatay military exercise may revive speculation, denied by officials, that Turkey plans to create a buffer zone in Syria to protect civilians and prevent a flood of refugees to Turkey.
Syrian refugee numbers have remained relatively low and Erdoğan is under little public pressure to take decisive action.
During the 1991 Gulf War, about half a million Iraqi Kurds fled to Turkey, returning only after Western powers, along with Turkish contingents, set up a safe haven across the border.
Syria and Turkey almost went to war in the late 1990s when Damascus was sheltering terrorists.
Syria's old claim to Hatay has bedeviled relations with Turkey. After the Ottoman Empire collapsed in World War One, the province passed to French mandate Syria. Syria gained independence in 1936, but Hatay became part of Turkey in 1939.
Erdoğan was reported to have reached an understanding with Assad in the mid-2000s whereby Syria would drop its claim on Hatay in return for enhanced trade and water rights from Turkey, but neither side has formally acknowledged any such agreement.
With relations again chilly, Turkey has hosted several meetings of Syrian opposition groups, including one at the weekend where a broad-based Syrian National Council was formed.
The council, grouping Assad's secular and Islamist foes, said the world was obliged to protect the Syrian people, but it rejected foreign intervention that harmed Syrian sovereignty.