'Israel poses a threat to the region' 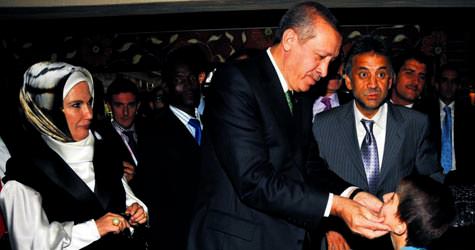 While in South Africa, Prime Minister Erdoğan responded to a question from an Israeli diplomat by stating that Israel poses a threat to the region due to its atom bomb.

Once again, developments in the Middle East were at the top of the agenda during Prime Minister Tayyip Erdoğan's trip to South Africa. Erdoğan not only delivered a number of important messages to Israel, but he also told an Israeli diplomat that Israel was a threat to the region as long as it harbors an atom bomb.
During a conference on Turkish foreign policy held at the South African Ministry of Foreign Affairs, Israel's South Africa Deputy Ambassador Yaakov Finkelstein asked the following question: "It is true that the tunnels in Gaza are used to provide food, however they are also used to smuggle in weapons. The Palmer report stated that the Gaza blockade is legal. We live in South Africa and here we believe that conflict should be solved through dialogue with the enemy. When it comes to the Palestine-Israel conflict, shouldn't it also be solved through dialogue? With Turkey having sent back the Israeli envoy, how will we reach a solution to the current conflict situation?
Erdoğan responded by providing the following messages:

"YOU HAVE EVEN BOMBED THE U.N."
* "First off, I want you to know this. Atom bombs, nuclear weapons or phosphorus bombs cannot be passed through these tunnels. Israel has used phosphorus bombs on Gaza. This is a weapon of mass destruction and it is a crime to use weapons of mass destruction. You cannot most likely say yes to this. If any weapons are to pass through those tunnels it would only be small-scale. Rifles could get through; however Gaza was besieged with tanks and with cannons. Meanwhile, phosphorus bombs were set off. You have even bombed U.N. buildings. Israel has done this as well. Yet still, they are unable to state that they have an atom bomb. However everyone attacks Iran because they have an atom bomb.

* What sort of justice is this? At present, I see Israel as a threat to its surroundings as well as to the region because, they have an atom bomb. In addition to all of this, Israel is currently in an occupying position and Israel also conducts state terror in the region, this is not something new. And I ask, since rockets were thrown from Gaza and Palestine, and I also asked Olmert this question, can you say how many Israelis were killed? They did not give us an answer. Yet absolutely everyone knows that tens of thousands of Palestinians and Gazans were killed in the region by Israeli bombs and we know that it was done so heartlessly.

* Turkey was their most important friend in the region and by their own hands they have broken that friendship and have lost Turkey. They are in the position of having pushed themselves to be alone in the region. Palestinians are the owners of that land. You are now living free, comfortable and peacefully in South Africa, however Palestinians are unable to find that peace in their own land. (This statement was received with applause.)

* As long as they refrain from apologizing and refuse to pay compensation or lift the embargo on Gaza, it will not be possible to repair relations. Our earnest desire is for the Israeli government to retract their incorrect accounts as soon as possible."

THE WOUNDED IN MOGADISHU ARE COMING TO TURKEY TODAY
After the recent attack in Mogadishu, Prime Minister Erdoğan made a call to Somali Prime Minister Sharif Ahmed to express his sadness over the attack and offer his condolences. Erdoğan proceeded to deliver an order for 30 of the wounded victims to be brought by private plane to Turkey to receive treatment. Accordingly, the wounded victims will be brought from Somalia to Turkey today. Ankara will be increasing security for Somali embassy members, TİKA staff and NGO members. Erdoğan also delivered a message to the Civil Society Organizations working to provide aid in Somalia. "Yesterday, 65 people were unfortunately killed by fellow Somalis. A significant number of those were youths that had been invited to study in Turkey. This has of course only increased our grief."

Erdoğan also paid a visit to the Johannesburg stadium, referred to as "Soccer City" Erdoğan was gifted a South African silver tray as well as a set of cups which depicts the historical events which transpired during the 2010 FIFA World Cup. Meanwhile, Minister of Economy Zafer Çağlayan stated to journalists, "They wrote that I didn't play the vuvuzela which has stuck with me, so I have come to play" which he proceeded to do.

Selimiye Mosque in South Africa
A mosque similar to the Selimiye mosque in Edirne will be built in South Africa's most crowded city Johannesburg. Financed by businessman Ali Katırcıoğlu, the project run by Orhan Çelik is anticipated to be completed by January 2012. The complex will not only include a mosque, but will also host a school, dormitory and sports facilities.