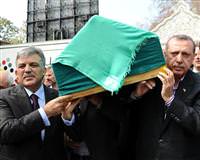 Ushering his mother off on her final journey, Prime Minister Erdoğan was unable to hold back his tears during the funeral prayer service.

FATIH MOSQUE OVERFLOWED WITH MOURNERS
Prime Minister Tayyip Erdoğan's mother Tenzile Erdoğan was laid to rest yesterday with a ceremony that overflowed with visitors. Thousands flocked to offer their support. Along with his family, Prime Minister Erdoğan was also joined by President Abdullah Gül as well as a number of state ministers.
PALLBEARERS ERDOĞAN & GÜL
Arriving to the ceremony in the funeral coach, Erdoğan then carried his mother's coffin on his shoulder. Erdoğan was also the first to throw soil over her grave.
Erdoğan has also received a number of messages of condolences from state leaders and diplomats throughout the world. While Palestinian State Leader Abbas, Iraq's Regional Administration Leader Barzani and Iranian Prime Minister Ahmadinejad paid telephone calls to Erdoğan to offer their condolences, a number of others including David Cameron and Nicolas Sarkozy sent messages.