Storms swell in the Aegean 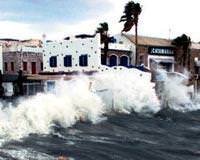 The heavy downpours and windstorms from the central Mediterranean, which spread to the nation’s western regions, have resulted in flooding the nation’s most popular touristic destinations.

BODRUM: With 51 kilograms of rainfall within a span of two hours, a number of ground-level business locations suffered from intense flooding. Winds at 65 kilometers an hour resulted in creating large waves in the regularly calm Aegean Sea. A significant amount of water collected along Kıbrıs Şehitleri Street. Meanwhile, overflowing storm drains resulted in difficult navigation for drivers out on the streets.

MARMARİS: The 40 kilometer strong southwest winds resulted in dragging an anchored 12 meter-long boat, the "Tambuka", to the shore of a public beach.

IZMIR: A number of homes and businesses were flooded in Izmir's Hatay, Güzelyalı and Narlıdere districts. In Dikili and Bergama, rainfall reached 63 kilograms per square meter and in Çeşme and Menemen there was 58 kilograms of rainfall recorded.

AYDIN: The Keçideresi creek in İmamköy overflowed, leaving 30,000 square meters of crop fields immersed in water. In Didim, the storm caused a number of roofs to blow off of houses. In Akbük village, a number of ships anchored in the open sea were dragged onto land due to the strong winds.

ÇANAKKALE: In Lapseki, a state hospital's cafeteria and archive sections were flooded. A significant number of homes and businesses were left under water. The heavy downpours and winds are expected to abandon the Aegean tomorrow.

ANTALYA:
While the downpours continue to negatively affect life in Antalya, yesterday the rainfall reached a record level. Last night in Antalya, 300 kilograms per square meter rainfall was recorded. According to an announcement, this figure is approximately 70 kilograms more than the last record rainfall which was recorded 37 years ago. According to the information obtained, six people are missing in the town of Gebiz, located in Antalya's Serik district.