188 members look to the words of five members 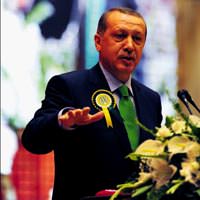 Stating that the United Nations’ is in the hands of five member-states, Erdoğan went on to question, “Can the U.N. deliver justice in this manner? Criticizing the silence in the face of starvation, Erdoğan states, "then, they become obese.”

During an address at an opening ceremony for Istanbul University's (İÜ) 2011-2012 school year, Prime Minister Tayyip Erdoğan, directed harsh criticism at the hierarchy operating in the United Nations. At the ceremony held at the İÜ Science Department's Ord. Prof. Dr. Cemil Bilsel Conference Hall, İÜ Rector Prof. Dr. Yunus Söylet and Muhammet Atak, representing the İÜ student body, offered condolences to Erdoğan for the recent loss of his mother.
During the ceremony Erdoğan tied the current global and societal struggles to the incorrect and unjust balance that has prevailed over the past 50 years. Explaining that the U.N.'s permanent members were established according to the conditions prevalent during World War II, Erdoğan stated; "Changing this is out of the question."
Throughout the world, there are 193 U.N. countries, when we put five of those aside, then we are left with 188 member nations who are waiting on the words of the aforementioned five nations. All of the ranks are in their hands. Can the U.N. distribute justice this way?" Erdoğan went on to address the U.N. by stating, "You exerted pressure for sanctions on Iran; however you do not instill the same sanctions or pressure on Israel. Why? If you did, you would see just how the Palestine-Israel issue would be solved."
Explaining that it is only possible to comprehend the poverty faced in Somalia and Africa by witnessing it there, Erdoğan stated, "Believe me if they simply gave them the crumbs built up in the double cuffs of their pants then everyone would raise to their feet there. However they haven't been there. Go see what it's like there. What kind of poverty is this? Then they go and become obese."
Criticizing France, England and Italy with colonialism, Erdoğan went on to state; "They exploited for years. Now they are calculating in the same manner. They are thinking, there are oil wells there, how can I get my hands on them." Erdoğan went on to defend the notion that the new world will be one which will say 'enough already' to this unjust and unfair direction, and stated; "Because, these miscalculations have now run their course, this era is over. This outdated order of power and ambition can no longer be sustained."
THE CONSTITUTION SHOULD BE AN EXAMPLE
Expressing that they have not placed any prerequisites on the new constitution, Erdoğan stated, "We need the efforts of all of our academics, our youth, our civil society organizations and our media in this venture. Just like in construction, we need to add all of our knowledge and ideas to the process."
Meanwhile, during an address at the Istanbul Sabahattin Zaim University, Prime Minister Erdoğan stated that they stand against any form of prejudice, and said, "There are no guests in this country just homeowners." Reminding that it was Kosovo-born Mehmet Akif who wrote the National Anthem, the Prime Minister stated, "How can you describe it, he used the expression, some pursue ethnic nationalism in vain. The entire world is aware of Turkey's strength but want to trip it up and to stop Turkey on its path. Whereas we are just calling on everyone to think at least as big as Turkey does."
After delivering the opening addresses, Erdoğan went on to visit his mother's Karacahmet grave site.