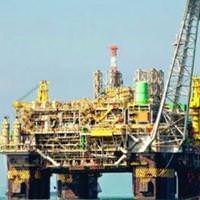 Greek Cyprus, which is in dispute with Turkey over oil and natural gas drilling rights in the eastern Mediterranean, said on Tuesday it had high expectations of finding hydrocarbons in an area south of the island.

Greek Cyprus's US partner, Texas-based Noble Energy, began drilling an offshore prospect three weeks ago bordering two significant gas discoveries made by Israel.
"We anticipate there is a high possibility of finding deposits in the area, which is why Noble is there," Energy Minister Praxoulla Antoniadou said.
Turkey says the internationally recognized Greek Cypriot administration has no authority to explore for hydrocarbons until the island's division has been resolved.
Noble started its deepwater drilling some 100 miles south of Cyprus in September and aims to reach a depth of 4,000 metres beneath the sea bed. By Tuesday, it was at a depth of 2,200 metres.
Ankara sent a research vessel with a military escort to the region last month, saying it too planned to launch exploratory work unless the Greek Cypriots stopped.
Antoniadou was non-committal on reports that drilling had already shown significant signs of gas. Even if traces of gas were detected, it did not mean a deposit had been found, she said.
"At the moment we are only halfway to meeting our drilling target; we are now at 2,200 metres below the seabed, our target is to reach 4,000 metres, which is where we have expectations that there could possibly be hydrocarbon deposits," said Antoniadou, who is commerce, industry and tourism minister.
The Phileleftheros daily reported that gas had already emerged, and that the deposit was expected to exceed Greek Cypriot officials' initial estimate of up to 10 trillion cubic feet (tcf) of natural gas.
Leviathan, an Israeli field close to the Greek Cypriot prospect, holds reserves estimated at 16 tcf and has been described as the world's biggest find of the last decade.
Turkey says the Greek Cypriots, who are a signatory to the UN Convention of the Law of the Sea and are carrying out research in a designated maritime zone in accordance with the accord, have no jurisdiction to search for hydrocarbon reserves as long as the island's division remains unresolved.