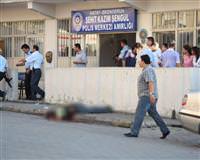 Terrorists ambushed a police station in İskenderun using long-barreled rifles and killing one officer… In the conflict, a ‘suicide bomber’ was shot in the head and killed.

Yesterday at approximately five o'clock in the afternoon, PKK terrorists riding in an automobile with the plates 34 BD 080 joined by a black jeep, sporting the plates 06 BD 154 staged a long-barrel rifle attack on police station situated on the İskenderun-Adana highway, in Hatay.

Police reacted early and immediately began firing on the terrorists which developed into an open cross-fire. At this point, an individual jumped out of the jeep and began running towards the station. At about one meter's distance the terrorist was rendered inactive, preventing an even further potential disaster. It turns out the terrorist was a suicide bomber and had a bomb strapped to his body.
Four police officers were wounded in the attack. The terrorists ran off in the vehicles they arrived in. The wounded officers were taken to the hospital, however despite all medical efforts, police officer Kadir Avcıoğlu lost his life.
The body of the terrorist that was shot in the head lay in front of the station for awhile due to the inability to intervene as he had a bomb strapped to his body.
Military exercises were being held at approximately one kilometer's distance from the station, the proximity to the exercises, which came to a close yesterday, was also attention-drawing.