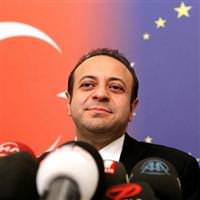 European Union candidate Turkey's sole goal in talks with the bloc is full membership and no other options are acceptable, Turkish EU Minister Egemen Bağış said on Wednesday after the release of the latest EU progress report.

"Full membership to the union is Turkey's only goal, no other goals can be accepted," Bağış told a news conference.
"We hope that the EU will soon emerge from its eclipse of the mind," he added in comments in the report.
Opposition from Cyprus as well as French and German reluctance to admit the largely Muslim state is the main obstacle to Turkish membership and a "privileged partnership" has been mooted as an alternative to regular membership.
Just under half of Turkey's exports are sold to the European Union, and its booming economy stands in stark contrast with Europe's financial woes.
In an annual report on countries seeking EU membership, the Commission criticized Turkey, the largest candidate, for not doing enough to normalize relations with EU member Cyprus.
Turkey has said it will freeze ties with the EU presidency when Cyprus takes over the rotating role in mid-2012.
In a reference to a recent spat with Cyprus over gas drilling rights in the eastern Mediterranean, the Commission told Ankara to avoid threats that could further damage ties.
It also noted mounting concerns within the European Union over losing influence with Turkey at a time when Ankara's clout is rising in the Middle East and North Africa.
The Commission said Ankara's alignment with EU foreign policy fell in the last year. In particular, it listed EU efforts to use sanctions as one area where Turkey disappointed.
"Turkey did not align with EU restrictive measures on Iran, Libya and Syria," it said.
EU Enlargement Commissioner Stefan Fuele said both Brussels and Ankara were frustrated by the lack of progress in Turkey's EU accession. He said the EU should find new ways to engage with Turkey, including closer cooperation within a customs union and new talks on visa-free travel.
While welcoming increased civilian oversight of security forces, the Commission said Ankara was not doing enough to curb corruption and reform its judiciary, or to improve transparency of political party financing and freedom of expression.
It said protection of women's rights remained a major shortcoming.
Addressing economic policy, the Commission said Turkey has improved its state aid rules and strengthened the stability of its financial sector but gave no new rights to workers.
Bağış said the report was out of focus.