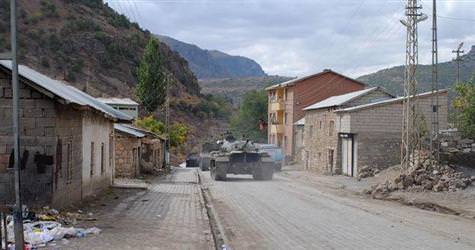 Simultaneous attacks staged by eight separate PKK terrorist groups…
The attacks were staged by eight different groups of PKK terrorists on security outpost stations and military units in Hakkari's Çukurca district's center and in the Keklikdere district. The attack was staged at one a.m. and resulted in combat which went on until the early morning hours.

The death toll from the attack staged by terrorists on police and gendarmerie buildings was finally determined this morning. It has been announced that a total of 24 police and soldiers were killed in the ambush and ensuing combat.

According to initial findings 24 were killed and at least 18 soldiers were also wounded from PKK terrorists opening fire on military outposts in the Hakkari province, located on the border with Iraq.
Officials note that combat is still ongoing in points and they are concerned the death toll may rise. This may be due to the high number of wounded, some in critical condition, especially from an attack on police lodging in a police station located in the center of Çukurca.
The attacks come only a day after five policemen and three civilians, including a 2-year-old girl, were killed in a roadside bomb attack planted by suspected Kurdish rebels in nearby Bitlis province.

GENERAL ÖZEL IS IN THE REGION
Meanwhile, following the attack, Chief of General Staff General Necdet Özel and other land forces commanders departed for the region in order to inspect the sites of the attacks.

An announcement delivered through police transmitters, called for troops to be, "fully armed, to wear bullet-proof vests and to be ready for combat."
President Abdullah Gül responded to the ambush by stating, "We will stage a retaliation attack and they will feel the same suffering we have… Those who believe that they have rattled our state with this attack will see that the revenge for this ambush will be very big, there will be retaliation."
Wednesday's attacks also come only days after Turkish President Abdullah Gül visited troops in the region to boost morale in an area that has seen increased violence in recent months.