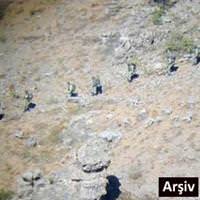 Turkish commandos crossed the border into northern Iraq in pursuit of PKK terrorists on Wednesday after the terrorists killed 26 Turkish soldiers in attacks in southeast Turkey, military sources stated.

They also said there were intermittent clashes between the troops, who advanced some 3-4 km into Iraqi territory, and PKK terrorists in the border area near Çukurca in Hakkari province.

Terrorists have stepped up their attacks in southeastern Turkey, killing more than 50 Turkish security personnel since July.

The Turkish military has launched retaliatory air raids on PKK targets in northern Iraq.
PKK terrorists took up arms against the Turkish state in 1984 and more than 40,000 people have died in the conflict. They have bases in northern Iraq from which they cross the border to attack Turkish targets.