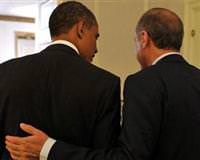 U.S. President Barack Obama and the European Union led a chorus of Western condemnation of PKK terrorist attacks on Turkey on Wednesday, voicing support for Ankara as its forces launched retaliatory air and ground assaults in Northern Iraq.

Obama vowed to continue U.S. cooperation with Turkey in facing the PKK, which killed 24 soldiers in simultaneous raids on seven remote army outposts on Turkey's rugged southeastern border with Iraq before dawn.
Turkish forces quickly responded with air and ground assaults on terrorist camps over the border in Iraq.
"The United States will continue our strong cooperation with the Turkish government as it works to defeat the terrorist threat from the PKK and to bring peace, stability and prosperity to all the people of southeast Turkey," Obama said in a statement.


EU foreign policy chief Catherine Ashton expressed deep concern over the attacks and said the EU continued to view the PKK as a "terrorist" organization.
"I was appalled to learn of today's shameful terrorist attacks in Turkey by the PKK. I condemn them in the strongest terms, and deeply regret the loss of life," Ashton said in a statement.
"I stress once again that the EU stands with Turkey in its resolve to fight against terrorism. We should all be clear that nothing justifies such indiscriminate violence," she said.
"The PKK remains on the EU's list of terrorist organizations, and the EU has recently stated its readiness to intensify its dialogue with Turkey in combating terror."
NATO Secretary General Anders Fogh Rasmussen said in a statement "there is no justification for such acts of violence" and that NATO "stood in solidarity in the fight against terrorism" with member Turkey.
France, in condemning the raids, called on Kurds on the Turkish side of the border to disassociate themselves with the PKK following its deadliest attack in decades.
"France calls on those elected representatives of the Turkish population of Kurdish origin to clearly distance themselves from the terrorist violence of the PKK," French Foreign Ministry spokesman Bernard Valero said.
"These terrorist attacks only strengthen France's will to stand side by side with Turkey in the fight against terrorism and to support the efforts to find a political solution to the Kurdish question."