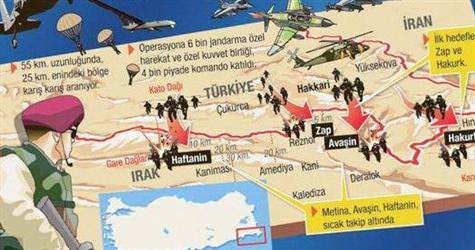 One-thousand Turkish soldiers, 6,000 of which are members of the Special Forces, have crossed into Iraq backed by helicopter gunships to attack PKK targets in the northern region.

Turkish security officials estimated their forces, numbering about 1,000 inside Iraq, had killed 21 fighters from the PKK terrorist organization. It was unclear how deep into Iraq this counter-offensive could go.
The military said it had put troops from 22 battalions into the field for ground attacks in five different areas on either side of the border, and it had also launched air strikes.
Turkey's leaders have vowed revenge after one of the worst losses of life suffered by the army since the terrorist organization began attacking in 1984, when PKK terrorists mounted a series of deadly night-time raids on army outposts in Turkey's mountainous southeast on Wednesday.
Prime Minister Tayyip Erdoğan confirmed an initial campaign against the PKK terrorists had begun, but said the theatre of operations was limited to specific areas.
"Air and ground operations are underway; our aim is to take the first step in the designated coordinates," Erdoğan said.
There is speculation that the operation could herald a full-blown incursion, as happened in 2008 when some Turkish troops swept into northern Iraq.
Such a prospect adds to concern over instability in the region. U.S. troops are due to withdraw from Iraq this year and mutual neighbor Syria is in the grip of a bloody crackdown on pro-democracy protesters.
In Çukurca, one of the districts attacked by the PKK, it was eerily quiet on Thursday, with little sign of military movement apart from half a dozen helicopters passing overhead.
In the southeastern city of Van, soldiers carried Turkish flag-draped coffins one by one on to waiting military planes and helicopters to be taken to funerals across the country.
Erdoğan and President Abdullah Gül wore badges bearing the photograph of a soldier on their lapels as they attended the funeral of one soldier brought back to Ankara.
More than 40,000 people have died since the conflict began and Erdoğan is under pressure to show decisive action, which could jeopardize efforts to reach a peaceful settlement.
On Wednesday night, people chanted slogans against the PKK, which has claimed responsibility for the attacks, at protests in several cities.
Taxi drivers in Istanbul blocked one of two bridges across the Bosphorus Strait, registering their anger by blaring horns. Several newspapers on Thursday ran banner headlines quoting President Gül's words: "Our revenge will be great."
NEIGHBORHOOD SUSPICIONS
The strong stand taken by Turkey against Syrian President Bashar al-Assad's crackdown has raised some speculation that Damascus might retaliate by stirring up terrorists in Turkey, which possesses the second largest military in NATO.
Iraqi officials joined U.S. President Barack Obama, Ankara's NATO allies and the European Union in condemning the attack.
The Iraqi Foreign Ministry issued a statement on Thursday saying that the Iraqi government and the autonomous Regional Government in the Iraqi north were committed to "maintaining border security and security cooperation with the Turkish government to prevent such acts being repeated."
But Turkish Foreign Minister Ahmet Davutoğlu was quoted by Turkish officials telling his Iraqi counterpart Hoshiyar Zebari - himself an ethnic Kurd - on Wednesday: "It is not time to condemn. It is time to take concrete steps."
Iraqi officials in Baghdad say it is difficult for them to control the rugged area where PKK terrorists have their camps. Turkish, Iraqi and U.S. officials meet often on security.
Erdoğan, one of the most popular politicians in the Middle East for his harsh rhetoric against Israel and his championing of Palestinian rights, said he expects full cooperation from the international community in the fight against the PKK.
The European Union, which Turkey wants to join, has pushed the Turkish government to grant more rights to the Kurds.
But EU countries have also urged Kurdish lawmakers to distance themselves from the PKK, which is considered a terrorist group by the United States, the EU and Ankara.
Erdoğan's AK Party government has passed cultural and political reforms favouring ethnic Kurds with the aim of ending the violence fed by Kurdish grievances, and has pledged to work with the opposition, including the Kurdish bloc, to rewrite a constitution that was expected to address Kurdish demands.