Working together to battle PJAK and the PKK 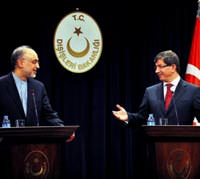 Iranian Foreign Minister Ali Akbar Salehi said on Friday that terrorism is a common problem for Turkey and Iran and that cooperation between the two countries should increase.

"We need to fight against it with more serious cooperation," Salehi told a joint press conference in Ankara with Turkish Foreign Minister Ahmet Davutoğlu.
Also during the joint press conference, NATO member and close U.S. ally Turkey cast doubt on Friday over allegations that Iranian agents plotted to kill the Saudi ambassador in Washington, saying it did not believe Iran would be engaged in such an act.
"We don't believe that Iran would be engaged in such an act, but America says they have evidence," Ahmet Davutoğlu, Turkey's foreign minister, told a joint news conference with his visiting Iranian counterpart Ali Akbar Salehi.
"Governments should be transparent on such issues. Those who make the claims should also be clear about their claims, and Iran should answer to that," Davutoğlu said.
Tehran has denied the allegations, saying they are part of a smear campaign. Salehi said it was a "waste of time" to talk about the accusations.
Davutoğlu later said in comments to the press that the U.S. allegations were "serious" and urged Iran to be fully transparent.
"Claims that a country will assassinate another country's ambassador in a third country are very serious and should be handled with care and seriousness," Davutoglu said.
"Our advice to our neighbor Iran is to pay attention to the evidence the U.S. has and be helpful with full transparency during the process."
Davutoğlu called on the United States and Iran to address their differences constructively.
"What needs to be done now is that all parties involved share what they have and clear the issue without giving way to a further increase in tensions. Turkey is ready to contribute if there is anything we can do to help relieve the tension."
Turkish media reported this week that the United States had sent representatives to Turkey to present evidence of the alleged plot and discuss the allegations with Turkish officials.
A U.S. embassy spokesman would not comment on the reports. "Our position on this issue is well known," he said.
U.S. President Barack Obama has said Iran will face the harshest possible sanctions for the alleged plot and has not ruled out military action. A U.S. grand jury on Thursday formally indicted two men suspected of being part the plot.
European Union governments agreed on Friday to impose sanctions on five people linked to the alleged plot, after Britain froze the assets of five men, including the two central suspects.
Turkey, which has built up strong trade and political ties over the last years with Iran, has been out of step with the U.S. stance towards Tehran in the past, but it agreed last month to host a radar system for a NATO missile shield program.
Washington has increased pressure on Ankara to enforce sanctions against Iran over Tehran's nuclear activities.
Turkey says it observes United Nations sanctions against Iran but says it is not obligated to adhere to a separate set of U.S. and European sanctions.