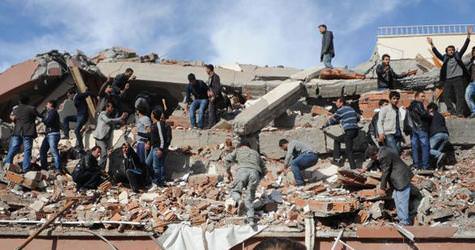 An aftershock with a magnitude of 5.4 shook Turkey's southeast province of Van on Tuesday, the Kandilli Observatory and Earthquake Research Institute said, two days after a powerful earthquake hit the region, killing at least 432 people.

It said the epicenter of the aftershock was Degirmenozu, between Van city and the badly hit town of Ercis.

The death toll from the 7.2-magnitude quake rose to 432, from an earlier 366, the Disaster and Emergency Administration said. The final count was likely to rise further as many people were still missing and 2,262 buildings had collapsed.

Thousands slept for a second night in crowded tents or huddled around fires and in cars across a region rattled by aftershocks in Van province, near the Iranian border.

The center of Van, a city of one million, resembled a ghost town, and in the hard-hit town of Ercis thousands of people roamed the streets.

Ankara said it was sending more tents and blankets. In some distribution centers, fighting broke out among desperate victims to grab tents from overwhelmed aid workers.

The prime minister's Disaster and Emergency Administration said priority should be given to delivering tents, blankets, sleeping bags, water and food to the victims. Electricity cuts have hampered rescue efforts, and there are worries about the weather with winter snows less than a month away.

Quake rescue efforts focused on Ercis, a town of 100,000 that was worst hit, and Van, the provincial capital.