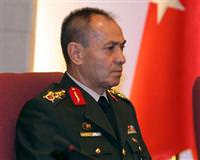 A retired general was given a suspended sentence of almost a year in jail on Tuesday for insulting the Prime Minister and the AK Party.

The final hearing in the case against General Saldiray Berk, who is also a suspect in an alleged coup plot, was held on Tuesday.
Erdoğan's lawyer petitioned the Ankara prosecutor's office last year, citing a speech Berk gave in 2008 during a visit to a village in eastern Turkey.
Finding Berk guilty of the charge, the court, in the eastern province of Erzincan, suspended the 11 month and 20 day sentence for five years.