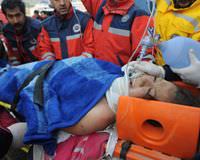 The woman, Gözde Bahar, went into cardiac arrest as she was being transported to hospital in the town of Ercis, one of the hardest hit by Sunday's 7.2 magnitude quake.

Doctors later managed to revive her. She was in critical condition at a hospital in the provincial capital of Van, Reuters reporters at the scene said. Rescuers battled against time to find more missing people from the quake.