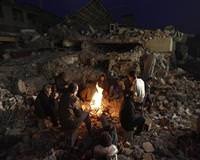 Turkey struggled to provide shelter on Wednesday to tens of thousands left homeless by an earthquake that killed nearly 500, and rescue teams began taking painful decisions to call off searches for those buried alive.

At another crumpled building in the town, rescue workers who had worked non-stop for more than 48 hours switched off their generators and lights, convinced no one was left alive.

Seconds later, they received word that someone trapped below had made contact on a mobile phone.

"There are three people trapped under there. When we lifted a concrete slab, the phone must have been able to get reception," said one rescue worker, as the lights were turned back on and his team returned to their job.

But hopes of finding more survivors were fading as time passed, and attention was shifting to the task of providing shelter to victims for the approaching winter.

Sunday's quake, Turkey's strongest in a decade, spurred the government to accept offers of tents and prefabricated houses from other countries, including from Israel, despite high tensions between the two.

Prime Minister Tayyip Erdogan's government started out by saying Turkey could handle the disaster alone, and Ankara accepted the many offers of help only two days after the quake.

A Turkish foreign ministry official said an Israeli plane was expected to arrive in Ankara on Wednesday with five prefabricated houses. Despite the humanitarian gesture, both countries played down prospects of their troubled relations being on the mend.

With temperatures falling and rain forecast to turn to snow this week, there were growing complaints of a lack of tents and of poor organization.

"We need an order, an organization here. What kind of help is this? These people are looting, not receiving aid!" one old man told Reuters.

In other areas, desperate survivors fought among themselves for tents distributed by relief workers.

The Emergency and Disaster Administration said the death toll from the quake that struck mountainous Van province near the Iranian border stood at 471, with 1,650 people injured.

A tour by a Reuters team suggested the damage was worst in the outlying mud-brick villages, some of which had been turned to rubble and mud.

The governor of Van province said 3,000 buildings had collapsed or were made useless. He said 600,000 people had been "affected" by the quake, but not all needed temporary accommodation. The exact number of homeless was unclear.

"Some residents with no damage in their homes are unable to go back because of the aftershocks. That is why everyone wants tents," Governor Munir Karaloglu said.

"We estimate the total number of people affected is 600,000. To provide tents to this amount of people in one or two days is something no country would be able to do.

"After the search and rescue efforts our biggest problem is housing. Our biggest need is tents for those citizens whose houses have completely collapsed."

NO SPACE IN CEMETERY

In Ercis, Gozde Bahar, an English teacher, was pulled out alive after 67 hours under the rubble. En route to hospital her heart briefly stopped. She was in critical condition.

"Of course I still have hope," said her fiancé Hasan Gurcan, 29, looking dazed as he relayed news on his mobile.

Six hours earlier, 18-year-old Eyup Erdem, a mechanics student, was found alive in Ercis. His father had waited for more than 60 hours by the rubble for his rescue.

"We have hope. There are always miracles. Normally, we do not expect anyone to survive after 72 hours but people have survived longer than that before," said a rescue official standing by the collapsed building where Azra was found.

But Van city officials said searches had stopped. "Search and rescue teams have stopped their operations because they assume it's not possible to stay alive under the rubble so many hours after the quake," Cahit Bozbay, Van deputy mayor, told Reuters.

In Ercis, workers were using heavy machinery to level buildings, although searches continued with sniffer dogs.

The government has put out requests to 30 countries, including Israel, for emergency materials including prefabricated housing, tents and containers.

Israel, whose ties with Turkey hit rock bottom after Israeli commandos killed nine Turks on board a Gaza-bound flotilla last year, immediately said it was launching an airlift of supplies.

On a main street in Van rescue workers pulled out the dead body of a woman in her 20s from the flattened remains of a seven-storey apartment block. "Our bride, our angel has gone," said a woman as the corpse was brought out, sealed in a body bag and taken away in an ambulance.

At one of the graveyards in Ercis, relatives buried their loved ones during noon prayers. "We have buried 10 from our family," Semih Celebi said, pointing to a row of graves as he and his relatives took turns with the shovel. "We had to bury some in another cemetery because there was no room."