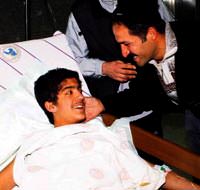 Authorities overseeing relief efforts after Turkey's biggest earthquake in over a decade were confident emergency needs for tens of thousands made homeless would be met by Saturday in hardest hit urban areas.

Search and rescue operations continued at nine sites in Ercis, a town of nearly 100,000 that suffered the most damage in last Sunday's quake, but no survivors have been found since a 13-year-old boy was dragged out of the rubble in the early hours of Friday.

The death toll from the tremor was at least 575, and the number of injured stood at 2,608, according to the official count. While 187 people were rescued over the past six days, chances of finding more alive were slim.

One of the bodies found on Friday was the father of a two-week-old baby girl called Azra whose rescue, along with her mother, on Tuesday had briefly uplifted the nation.

No official figures were available for the homeless.

The International Federation of Red Cross and Red Crescent Societies put the number of "affected people" at 50,000.

Niyazi Dogac Gucbilek, a senior health official drafted in from Istanbul, to run a mobile hospital near a camp of more than 330 tents, said 10 babies had been born there in the past five days, all perfectly healthy.

After dealing with trauma injuries and cardiac arrests over the past few days, the number of emergency crews and doctors would be cut by half on Saturday, Gucbilek said. The next phase would be countering acute respiratory illnesses and blood pressure problems, with winter fast approaching.

"Cold is the biggest problem now. We had many diarrhea cases In the first few days but now it is down to normal levels," he told Reuters.

Overseeing relief operations in the quake zone, Deputy Prime Minister Besir Atalay said there was no more need for tents or blankets, and there was no problem with the provision of food and water.

"We see that everything is normalizing. Temporary housing has been provided in Ercis and Van center. There is not a lot of rush anymore," Atalay was quoted as saying by state-run Anatolian news agency on Friday. "By tomorrow (Saturday) night all emergency needs will be met."

Atalay said efforts were still being made to deliver aid to outlying villages, where few of the primitively built houses are still standing or safe enough to sleep in.

International aid has flooded into Turkey, after it called for help to supply winterized tents, containers and prefabricated housing to shelter the homeless.

The first foreign planeloads of tents have arrived. On Friday, Armenia also sent aid supplies, despite a long history of enmity with Turkey and floundering efforts to reconcile.

The United States said on Friday Turkey had requested its help with the relief effort, and the U.S. European Command would start airlifting supplies such as blankets and sleeping bags within the next two days.

"The United States has received a request from the Turkish government for humanitarian support in the wake of the devastating earthquake that struck Van province earlier this week," said Pentagon spokesman Captain John Kirby.

"Our thoughts and prayers go out to all those who are suffering. And our ablest efforts will be expended in assisting in any way possible."

SOME LIGHTS BACK ON

However, despite relief efforts there were still some people begging for tents in Van, the provincial capital, where tents have been looted and sold on the black market.

Lights were switched back on in some buildings in the center of Ercis on Friday for the first time in six days and a pharmacy, a bank and a computer parts shop re-opened, but there was no running water.

There were fewer people meandering aimlessly round the streets and tent cities on the outskirts of town were expanding.

In Van, a city of a million people which suffered less damage, there were questions over the water supply with tests being conducted to ascertain whether it was potable.

The other major issue was convincing people their damaged homes were strong enough to withstand aftershocks -- there have been well over a thousand counted since the quake, including a few with a magnitude of between 5 and 6.

"If we can't convince people with little damage in their homes to go back inside their home, then we will need around 100,000 tents," Cuney Canis, a legislator for the BDP in Van, said.