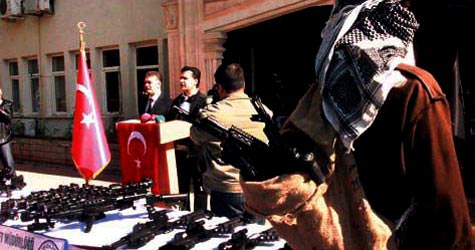 In Silopi, 88 Kalashnikov brand rifles, prepared for use with night vision telescopes for an assassination, were found in a cornfield.

The Department of Anti-Smuggling and Organized Crimes in Mardin began tracking a network of weapons smugglers upon receiving a tip. After teams spent a month, day and night, tracking down the perpetrators, yesterday an operation was staged in the Kavallı, Buğdaylı and Bostancı villages located in Silopi, Şırnak. During the operation, 88 long-barrel rifles equipped with night vision were found hidden in a cornfield. The weapons, which were supposedly brought into the country illegally from Northern Iraq, also contained shoulder roving equipment with telescopes able to scope a kilometer's range. The rifles were wrapped in boxing tape and placed inside sacks that contained shoulder straps for easy transportation. Three individuals were taken into custody. The confiscated weapons were displayed for the press in the Police Department courtyard where Mardin Governor Turhan Ayvaz stated that this incident marked the largest operation staged on weapons smuggling in decades.
Mentioning that these weapons also make their way indirectly to terrorist organizations, Governor Ayvaz, went on to state, "The special characteristic of these weapons, due to their telescope feature is their ability to provide night vision and are able to be used in snowy and foggy weather. The weapons themselves are from Russia; however the telescope equipment appears to have been acquired from a different country. They are weapons prepared to be used from both close and long range in an assassination." Governor Ayvaz also explained that recently a man was apprehended after being injured when a bomb he was making exploded in a house harboring terrorists. It was also noted that 12 explosive fuses and bomb making materials were also confiscated with the terrorist.