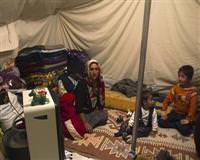 Eleven-year-old Rumeysa Kalkan's world was shattered on a sunny Sunday afternoon at 1.41 p.m.

That day, on October 23, a powerful earthquake killed nearly 600 people in eastern Turkey, devastating towns and villages and leaving tens of thousands homeless.

Rumeysa now lives with her family in a tent pitched on a windswept soccer field with other survivors, where she sometimes has nightmares in which the earth moves again and her two-year-old brother is missing in the rubble. She has to queue up in the freezing cold for soup and pasta. Her school is closed.

But in the last few days Rumeysa has begun to laugh and sing again, thanks to a group of voluntary psychologists who work with traumatized children in a tent camp on the outskirts of Ercis, the town hardest hit by the 7.2 magnitude earthquake.

"They teach us songs, we play games all day and we are having lots of fun," said Rumeysa, a skinny, chatty girl who wears a pink coat she got at the camp.

"After the earthquake I was afraid of the dark. My little brother could sleep but my sister and I could not. I don't have nightmares now," she said.

Psychologists and pediatricians say the devastation caused by the earthquake, Turkey's most powerful in a decade, has placed enormous stress on children, harming their ability to communicate and socialize.

Many have become withdrawn, afraid to leave crowded tents where they cling to their parents. Older ones are showing anti-social behavior and aggressiveness, adding to parents' woes.

In a town where at least 455 people were killed and thousands of homes were destroyed or made uninhabitable, the children of Ercis are among the most vulnerable victims. Many lost parents, brothers or sisters, their school life interrupted and their friends gone.

"Children are the ones who suffer the most the effects of such tragedies," said Alay Sekman, a 27-year-old social worker who volunteers for the Turkish Red Crescent at the largest tent camp in Ercis, with 300 tents and more than 1,500 residents.

"We take them away from this difficult world they live in now to the life they had before, where they had friends and played games. It's an opportunity for them to heal."

Since the psychologist center opened, the children's lives -- and that of the camp -- has changed, said parents.

The children's voices rise above the otherwise dreary camp, a collection of tents flapping in the cold winter wind and frequent rain, as they sing, dance and play games with the psychologists on a muddy patch.

Some of the children went to the same school before the quake and have reunited at the play groups.

They have acrobatics contests, do impromptu performances or break into songs they have learned at the camp.

Many have bonded with the 30-odd young psychologists, whom they hug and kiss when they show up for their morning games.

"One more time, one more time," they chanted in unison when Sekman performed a pirouette and bowed to the young crowd.

Nedret Oztan, head of the Turkish Psychological Association, who has also worked with quake survivors in Pakistan and Iran, said 80 percent of people affected by earthquakes develop psychological traumas.

She said children sometimes feel guilty for what has happened to the family. Food and shelter are a basic necessity but psychological reconstruction takes time.

"The problem is this is just the beginning of winter. If they don't get proper housing it will double the trauma."

Parents say the psychologists have pulled some of their children out of depression, easing their own heavy burdens.

"After the quake she went into shock and couldn't stop crying. Now she gets up early, eats breakfast and rushes to the tent of the psychologists," said Rumeysa's mother, Sevda Kalkan. The father, a baker, is now unemployed.

Families in the tent camp are eager for their children to return to school, but in its absence they are happy the children are being entertained so they can take care of things such as filling out funeral papers or applying for prefabricated homes.

"My kids still have nightmares and have difficulty sleeping at night, but Songul seems more joyful nowadays," Ahmet Karlidag, a 42-year-old father of four, said of his 11-year old daughter. "She changed after they started playing in that tent."

Others like 13-year-old Sevgi struggle more. While other children appear blissful, she claps in a corner of the psychologists' tent following the games with her big brown eyes but keeps to herself, haunted by memories.

"My brother and I try to forget. It helps being here but I still can't help but remember the scenes I saw that day."