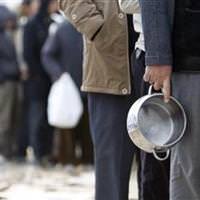 The death toll from last week's earthquake in Van rose to 596 Sunday, the day after authorities stopped searching for survivors and focused on helping thousands of homeless families in crisis.

In Erciş, the town hit hardest by the 7.2 magnitude quake that devastated Van province on October 23, some shops reopened on Sunday, electricity was switched back on in parts of town and one bank's ATM started working.
But with barely any of Erciş's nearly 100,000 residents ready to return to their damaged homes with strong aftershocks still rattling the area, life is anything but normal. One aftershock Sunday morning registered at magnitude 5.3.
Winter is fast approaching, temperatures plunge at night, and young and old in particular are falling sick in tent encampments set up by relief agencies on the outskirts of town.
The government's disaster management website said more than 43,000 tents had been handed out in Van. Officials say that is more than needed because people whose homes are not so badly damaged are demanding tents as they feel safer under canvas.
"Our house is in good shape but we live in a tent due to fear. We will go back once the aftershocks are gone and the government says our house is safe," said Fadli Kocak, owner of a bakery in Erciş, who hopes to be back in business in a week.
Many people were queuing to register for tents Sunday, a first step to having an inspection done of their home, as authorities say they will hand them out only after verifying that a building is too risky to live in.
"The problem here is that you can't give 100,000 tents in a town whose population is equal to that," Yalçın Mumcu, who coordinated search and rescue operations in Erciş states..
"Our people need to the trust the government, too. Everybody is asking for tents. They need to be patient, if the Prime Minister says they are going to build a new, better Van, I am sure they will," he said.