“You made a promise; send them” 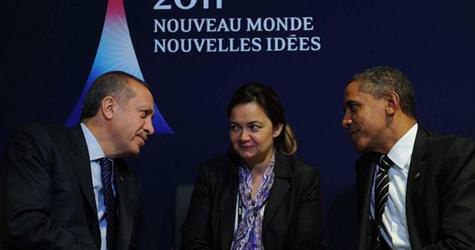 During a 25 minute conversation with Obama, Prime Minister Erdoğan reminded the U.S. President of the predators from Iraq as well as the promise of two new predators to be sent to Turkey. United States President Obama requested cooperation from Turkey in international policy against Iran.

Prime Minister Recep Tayyip Erdoğan and United States of America President Barack Obama first shared their woes and then went on to have a 25 minute one on one discussion during the G20 Summit being held in Cannes. During the conversation, Erdoğan thanked U.S. President Obama for the support granted in the struggle against the PKK and requested that the agreement reached during deliberations in New York on the Predator be realized as soon as possible. Meanwhile, Obama delivered the message for Turkey to be prepared for "unexpected sanctions on Iran." In terms of assisting in realizing the plan presented to Syria by the Arab League, both leaders reached a consensus to continue exerting pressure on Bashar al-Assad.
FULL PRESSURE ON THE PKK
According to the information obtained, during the discussion Obama and Erdoğan confirmed the agreement previously reached in New York. Prime Minister Erdoğan expressed how pleased he was to reaffirm the agreement reached regarding predators and helicopters being brought into Turkey from Iraq by the end of the year just prior to his meeting today with Iraq's Regional Kurdish Administration Leader Massoud Barzani. Erdoğan also requested that the two new predators in question be rented rather than purchased by Turkey in order to circumvent a Congress vote. In referring to the International Atomic Energy Agency (IAEA) report to be released on Iran in the upcoming week, Obama requested support by stating, "Turkey's stance against Iran is very important." Obama stated that if Iran is found to be developing nuclear weapons despite international sanctions and duties, "An unprecedented amount of pressure must be exerted on Iran by the international community. Turkey's cooperation in exerting this pressure is important."
During the twp leaders' discussion they also decided to adopt the same stance when it comes to Syrian State Leader Bashar al-Assad, who has recently accepted a proposal offered by the Arab League. After attempting time and time again to dissuade Bashar al-Assad from exerting violence and in the end finally cutting off relations, Turkey does not expect that Syria will follow the plan put forth by the Arab League. The two leaders shared the same viewpoint that Assad is simply using this plan to try to gain time.
"I KNOW THE PAIN OF LOSING A MOTHER"
Obama expressed his condolences to Erdoğan, not only for the recent loss of his mother Tenzile Erdoğan but also for what transpired in Van due to the earthquake. Obama said, "We are ready to fulfill whatever duty befalls us in terms of helping the earthquake victims." Obama also expressed his condolences for Erdoğan's loss and stated, "I have also lost my mother and I know very well what it means to lose a mother."
"THERE ARE THOUSANDS IN GERMANY THAT HAVE CONNECTIONS TO TERRORIST ORGANIZATIONS"
Prime Minister Erdoğan mentioned that during his trip to Germany, one of the most important topics discussed was terrorism. Upon Erdoğan's return from France, a press conference was held at the Atatürk Airport State Guest House, in which information was relayed regarding the Premier's trips to France and Germany.
Erdoğan commented on the meetings held with Chancellor Merkel by stating; "Of course during our conversations, terrorism was one of the main topics we discussed. At present there is no need to relay the actual numbers of people connected to terrorism groups in Germany, however I can say that it is a figure in the thousands and these individuals help terrorism organizations by serving them in some manner, by either harboring them or by executing duties and fulfilling orders. The thing is this is a reality, and we cannot overlook it."
Referring to his trip to France, Erdoğan stated that France also participated in the G20 Summit and that the economic developments in Greece were the main focus.
USA LOBBY AGAINST SELLING WEAPONS TO TURKEY
A group of Congress members in the U.S. have presented a 'joint decision draft' to the Congress in an attempt to obstruct the sale of weapons to Turkey. However, due to the legal process coming to a close soon, the chances of this draft being realized in sufficient time are weak. The draft aims at preventing the sale of military equipment, which includes three super cobras.