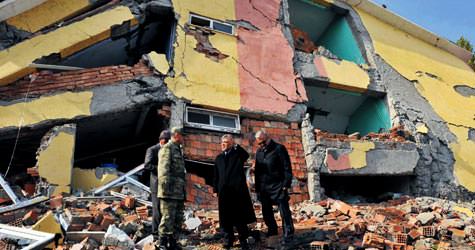 President Abdullah Gül spent the first day of the Greater Eid in the recent earthquake hit Van. During his visit, adults requested prefabricated containers and heaters, while children asked for socks. Gül thanked the public by stating, “Our nation displayed great generosity. Thank goodness, our public is appreciative and everyone is aware of what is being done.”

President Gül spent the first day of the Eid al-Adha with the earthquake victims from the 7.2 rattler in Van. While inspecting the damage in the effected regions in Van and Erciş, Gül delivered messages of "solidarity, fraternity and embracing one another as individuals of a great nation and running all together to the aid of those in need." President Gül departed by private plane from Ankara at 04:20 yesterday morning. Gül was accompanied by Deputy Prime Minister Beşir Atalay on his trip to Van yesterday. Gül was greeted at the Ferit Melen Airport by Governor Münir Karaloğlu. From there he went on to participate in a holiday prayer ceremony, where he celebrated the nation's citizens and especially the residents of Van for the Feast of Sacrifice. Noting that this holiday was bittersweet due to the recent natural disaster, Gül stated the following: "May Allah protect our nation and all of humanity from such calamities. To celebrate this Feast of Sacrifice at this time is truly meaningful. This is a time when solidarity and the feeling of brotherhood should be even stronger. We need to embrace each other even stronger as individuals of the same great nation during this time when it is crucial that all together, we run to the aid of those in need."
Gül later moved on to the tent cities erected by Turkey's Red Crescent. Hearing the woes of the earthquake victims, Gül immediately delivered orders in order to reach solutions to their complaints. The victims relayed their needs by both getting the opportunity to speak with the President personally or through letters. The majority of requests by the victims were for additional containers to provide shelters through the winter, and electric heaters, while the youngsters mainly requested socks.
Gül said, "There are still more things needed to be done. These will not be completed in one day. We will overcome all of this in a planned and programmed manner." Meanwhile, the president also gave the immediate order for children's need for socks to be dealt with as soon as possible. President Abdullah Gül responded to the citizens that complained about the confined quarters set up for them, by stating that they would be sent to larger accommodations with restrooms as soon as possible and then later their future homes would be built. "This will all take place step by step," Gül said.
LUNCH IN A TENT
Gül's second stop in Van was to the Gedikbulak Village, and from there to Erciş by helicopter, where he visited another tent city erected by Minister of Foreign Affairs İdris Naim Şahin and Turkey's Red Crescent. Gül was greeted by Red Crescent Chairman Ahmet Lütfü Akar and Red Crescent General Manager Ömer Taşlı, who briefed him on developments. Gül explained to the earthquake victims that the tent cities were just temporary and that eventually new homes would be built for the earthquake victims. After joining the earthquake victims for lunch, Gül moved on to the district center in order to inspect the demolished buildings and later headed by road to Van.
While in Gedikbudak village, President Gül relayed his condolences and commemorated the Feast of Sacrifice holiday. Gül heard out the villagers concerns of the increasingly harsh winter weather resulting in difficult living conditions and responded by assuring them that they would be building nicer homes in the region soon. Gül stated, "It is not possible to improve conditions in a single day. To create from nothing is something only God can do. We need to work together." Gül also visited the demolished site of the Gedikbulak Elementary School, and was briefed by Van Governor Münir Karaloğlu and the village official. Explaining that there had been a meeting in the school which commenced just ten minutes prior to the earthquake, and therefore there were only 50 people in the building at the time, Gül stated, "They were protected from a potentially even worse disaster."
Gül went on to state the following, "It's quite unbelievable. Why would there be a three-story building in a village, why wouldn't the school be more spread out? We must learn a lesson from all of this. What brings us joy is the fact that at such a painful time, everyone has run to their aid. Our nation has displayed great generosity. Significant campaigns were held and thank goodness our public is appreciative. Everyone is aware of what is being done and everywhere I have gone people have said to me, 'May God bless our state and our nation.'"