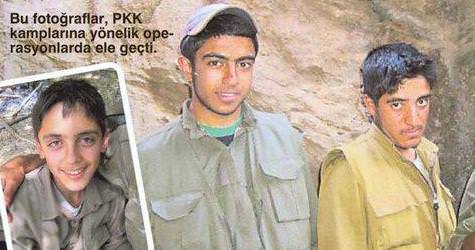 With the PKK abandoning their camps due to the ongoing operations transpiring in the Southeastern Anatolian region, a number of clues into the terrorists’ lives in the mountains are being uncovered due to the significant number of photographs recovered in the raids.

Photographs confiscated from the PKK camps set up in Hakkâri's rural region, showed that the terrorist organization went so far as to use children for their own gain. Some photographs depicted children between the ages of 13-14, posing with weapons. According to intelligence sources, these children were taken from their families into the mountains through the organization exerting pressure and making threats.
Another item of note in the photographs recovered is the caliber of weapons the terrorist organizations possesses… One of the most attention-drawing weapons detected in the photo was an M-16 American infantry rifle. Similar weapons were seen amongst those recovered recently in an operation staged by teams from Mardin's Anti Terrorism Department. The 88 weapons confiscated from the rural region in Şırnak were specially equipped with telescope technology to be used in an assassination.