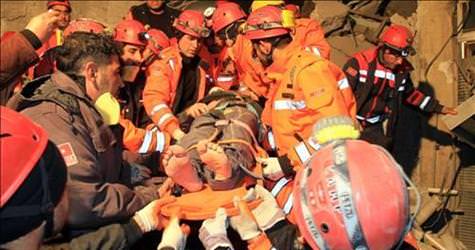 Several people were killed and scores more trapped when an earthquake hit Van, less than three weeks after another quake killed 600 in the same area.

An earthquake in eastern Turkey killed at least five people and scores more were trapped under the rubble of two hotels and a dozen other buildings, on Thursday, less than three weeks after another killed 600 in the same area.

The tremor destroyed at least seven buildings, including two hotels in Van city, and around 14 other structures in other parts of the region.

At least 100 people may still be trapped under the rubble of collapsed buildings with one reporter saying up to 70 people may have been staying at one of the hotels.

Twenty one people have so far been rescued alive from the rubble of the two hotels.

Rescue workers pulled a Japanese woman to safety from the rubble of the Bayram Hotel almost six hours after the quake.

Miyuki Konnai was part of a rescue and relief team sent to Van from Japan after the first quake. She was found injured but conscious and could be seen talking to her rescuers as she was carried to an ambulance.

Television footage showed panicked people running through the streets of Van and ambulances rushing through the city with their sirens wailing. Medical staff treated one unconscious person lying on an ambulance stretcher.

Wednesday's earthquake comes after a 7.6 magnitude tremor hit just northeast of Van on October 23. There have been hundreds of aftershocks since and thousands of people are still camping out in tents in freezing conditions.

Foreign Minister Ahmet Davutoglu, who had been in the nearby town of Ercis at the time of the quake Wednesday, went to the crisis coordination center in Van. Ercis was the worst hit area in last month's quake.

Around 30 ambulances stationed in Ercis were sent to Van in the wake of the tremor. Ercis is some 60 km north of Van.

Five planes were to fly to the region carrying search and rescue teams. Other rescue teams were traveling to the quake zone from the nearby provinces of Mus and Agri.

Turkey is criss-crossed with seismic faultines and experiences small tremors nearly every day. Some 20,000 people were killed by two large earthquakes in western Turkey in 1999.