The 'tired’ have collapsed! 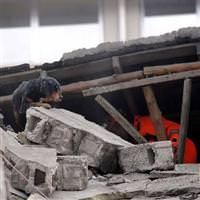 Van was rocked once again last night by an earthquake with an epicenter located in the Edremit district. Some specialists call it an ‘aftershock’, while Kandilli designate it as a ‘new’ quake. Twenty-five buildings collapsed, two of which were hotels. Thus far, 16 people have been saved from the demolished buildings and search and rescue efforts continue.

LATEST ANNOUNCEMENT FROM AFAD: 10 DEAD, 27 WOUNDED
The Prime Ministry Emergency and Natural Disaster Department (AFAD) has announced that following the 5.6 magnitude earthquake which was based in Van's Edremit district, 23 people were rescued while seven people have been killed. According to a written announcement by AFAD, 16 military, three Turkish Airlines cargo and three passenger planes, totaling 22 aircrafts in all, have begun transporting search and rescue and medical staff to the region. Twenty-five buildings were damaged in the quake. Already, a total of 783 search and rescue staff, 104 of which are from NGOs as well as 38 UMKE teams, eight search dogs, 54 heavy machinery, 11 ambulances, 986 tents and 5,280 blankets have been sent to the region.
Van was rattled once again last night at 21:23 with a 5.6 earthquake that comes following the October 23rd quake in the same region that resulted in 604 deaths. Twenty-five buildings, 22 of which were empty and two hotels which were housing journalists and Red Crescent officials as well as a training center collapsed in the quake. At the time our newspaper went to press, 16 people had been saved.
With nearly 100 pronounced wounded, speculation is that in the Bayram Hotel alone, 30 people may remain trapped. According to some specialists, this quake may have been an aftershock; however the Kandilli Meteorology Center called this earthquake an independent earthquake based in Van's Edremit district. According to Kandilli Meteorology Center UDİM Director Doğan Kalafat, "This earthquake was the result of the cracking of a separate area than that which caused the 7.2 earthquake. This is not an aftershock." The earthquake, which resulted in panic, also caused 25 buildings which had been cleared in the previous quake, to collapse. Out of the buildings which collapsed were two hotels, a study center and a number of village adobe homes. The demolished Bayran Hotel, was housing journalists, Red Crescent staff as well as guests from Iran. Meanwhile, within the first 15 minutes following the quake, five others were also recorded.
After yesterday evening's quake, those that had decided to return to their homes following the previous 7.2 earthquake immediately flocked to the streets. Last night's earthquake victims ran to the streets in tears trying to find their close ones. In the village of Çelebibağ, which is located in Edremit, a number of houses suffered cracks. The Bayram Hotel, which collapsed in this latest quake, was a 40-year-old structure. Search and rescue teams immediately began searching for people in the rubble of the collapsed hotel. According to initial findings, there were 70 patrons registered at the Bayram Hotel. It has not yet been determined how many of those were in the hotel at the time of the quake.
CİHAN TEAM SAVED
A team of journalists from the Cihan News Agency were saved at the last minute from being trapped under rubble. Returning from covering a story last night, the team checked into their hotel before leaving to go out for dinner. The building crumbled to the ground, just as the journalists were exiting. In shock, cameraman Özgür Güneş explains, "We were a three-person team and we had just checked into the hotel. We had changed our clothes and were just exiting the hotel when it began to shake. There was an extremely loud noise and then the building just collapsed. We were saved by just seconds from being trapped under the rubble."
CİHAN's live broadcast van was parked under the collapsed building. According to claims there are two DHA correspondents trapped under the rubble. Electricity and natural gas services were shut down for preventative measures following the quake, while schools which were expected to resume this Monday, will now be on break until December 5th. Turkey's Red Crescent has sent 15,000 tents while AKUT and other civil associations are sending additional crew and a number of other establishments have already sent aid by both air and by road. Foreign Affairs Minister Ahmet Davutoğlu, who happened to be in Erciş at the time of the earthquake, moved on to Van to be briefed by the Crisis Center. A number of other ministers are also planning to head out to the region today.