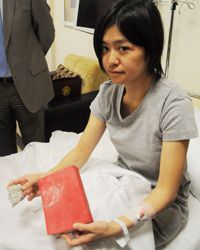 Trapped under the rubble after an earthquake brought down the hotel she was staying in, Japanese aid worker Miyuki Konnai had more to worry about than her fear of the dark, but a "ray of light" from her laptop helped her survive the ordeal.

Konnai had come to Van, a city in the remote east of Turkey, along with other Japanese aid workers to help survivors of a major 7.2 magnitude earthquake on October 23 that killed more than 600 people and left thousands of families homeless.

The Bayram Hotel where she was staying was so damaged by that quake that when a smaller 5.7 tremor struck on Wednesday night, the five-storey building came tumbling down.

At least 12 people died in the latest quake to hit Van city, including compatriot Atsushi Miyazaki, a doctor who had been helping the stricken community.

Konnai, a slightly built 32-year-old woman, was still conscious when she was dug out after waiting in the rubble for five hours.

"When I was waiting for the rescue team I kept telling myself, 'I cannot die here. I have lots of things I want to do in the future' ... (I kept) cheering myself up and waiting," she said at a hospital where she was taken for checks.

Sitting on a couch in one of the few parts of a hospital deemed safe enough to withstand jolts from the many aftershocks still rattling the region, Konnai looked exhausted and overwhelmed, but eager to describe how she survived.

"I really hate being in the dark so I was scared of opening my eyes and finding out I'm in complete darkness. So I was trying not to open my eyes," she said, her pale face marked by scratches and her hands fluttering as she spoke.

"But I was also afraid of not knowing what's going on outside and I tried to open my eyes, but I couldn't because of lots of dust getting in my eyes.

"When I finally managed to open my left eye slowly, there was a ray of light I could see in what I thought was complete darkness. That light gave me a relief and gave me a hope to live. That was the light from the computer I was using."

Outside the hospital, medical staff sat huddled round an open fire to keep warm. Hospital beds were lined up in the open with medical equipment set up as an outdoor emergency centre, while a tent served as a ward for patients.

Konnai said she had been moved by the amount of support Turkey had given Japan in the wake of the tsunami and nuclear disaster earlier this year, and had wanted to repay Turks for their support.

Turkey's Deputy Prime Minister Besir Atalay visited Konnai in hospital and asked her if she needed help to return to Japan.

"I want to stay here and continue our work," she said.