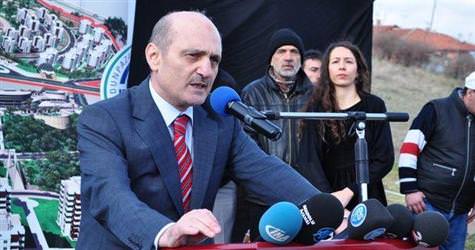 Ninety percent of revenue acquired from 2-B land sales as well as one percent of all traffic fines will be designated towards the urban renewal project. For the first stage of the project, 14,000 residences in Istanbul will be rebuilt. According to Minister Bayraktar 400 billion dollars in resources are needed for urban renewal throughout Turkey.

Preparations are complete for the 'Urban Renewal Bill' for which Prime Minister Tayyip Erdoğan has said, "we will do whatever necessary even if it costs our government in power". Expressing that 400 billion dollars of resources are needed for urban renewal throughout Turkey, Environment and Urban Planning Minister Erdoğan Bayraktar states, "Whatever the price may be, we must rehabilitate all buildings that are not durable in the case of an earthquake, are illegal or poorly built, no matter what the price".
A bill, entitled' "Regulations Regarding all Structures and Areas at Risk in the Case of a Natural Disaster' grants all authority in connection to urban renewal to the Ministry of Environment and City Planning and foresees the ministry opening an account at their disposal to acquire funds for the project. Funds will be transferred to this account form the following:
90% of all revenue incurred from the sales of 2b classified land.
All tax revenue from the general budget, and ten percent from first and second degree earthquake regions as well as five percent from all other regions.
50% of metropolitan shares designated for the Provincial Special Administrations and 15% from all other provinces.
All resources designated by the Emergency and Natural Disasters Administration to various associations for earthquake preparedness.
50% of all fines from the Building Code's 42nd article.
1% of all traffic fines.

The Ministry of Environment and City Planning has sent a memorandum to the nation's governorships, requesting 'All poorly built, illegal and non durable structures in the case of an earthquake or natural disasters be designated," the results of which are still awaited. For the first stage of the urban renewal project, 14,000 buildings in Istanbul will be rebuilt. Explaining the details of what they plan to do for the urban renewal project, Erdoğan Bayraktar emphasized that all of the work they plan to do will be dependent on compromise with citizens.
"If our citizens own two houses, then we will give them two houses. If it is possible and they want three houses, then we will give them three houses. Or if their homes happen to be shanties or illegal structures, then we will discount the price accordingly. We will be handing over flats worth 120,000 liras and we will set up 20 year payment plans based on the difference after deductions. We will not be adding interest, just the inflation difference. If we are able to rebuild in the same location, then we will do so. If there is a tenant, then we will provide help in form of rent for them to be relocated. If we cannot reach an agreement, then we will demolish the building through expropriation and we will make pay outs to citizens."