The perpetrators must be punished! 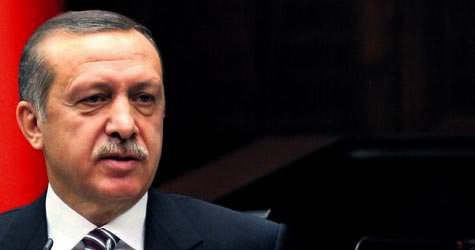 Prime Minister Tayyip Erdoğan on Tuesday warned Syrian President Bashar Assad his government was on a "knife-edge" and demanded an immediate apology after attacks on Turkey's diplomatic missions in Syria.

"Nobody now expects the (Syrian) people's demands to be met. We all want the Syrian administration, which is now on a knife-edge, to turn back from the edge of the cliff," Erdoğan told a party meeting.
"For hundreds of years, any hand that has gone for the Turkish flag has been answered to," stated Erdoğan who went on to deliver a message to Assad, "Do not apologize, find those responsible."
Non-Arab Turkey, after long courting Assad, has lost patience with its neighbor's failure to end an eight-month crackdown and implement promised democratic reforms. Turkey now hosts the main Syrian opposition and has given refuge to defecting Syrian soldiers. On Tuesday, Erdoğan praised an Arab League decision to suspend Syria.
Underlining how much ties between the two powers have deteriorated, protesters armed with sticks and stones attacked Turkish diplomatic missions in Syria over the weekend, burning the Turkish red and white flag. Syrian Foreign Minister Walid al-Moualem apologized on Monday for the attacks, which also included raids on Saudi and French missions. But Erdoğan said Turkey expected a further expression of apology. "I once again strongly condemn the attacks on Turkish officials and on the Turkish flag. We expect the Syrian administration to undertake immediately all the necessary steps to apologize and take responsibility," Erdoğan said. "Bashar, you are required to punish those who attacked the Turkish flag. We want the Syrian administration to not only respect the Turks in Turkey and the Turkish flag but also to respect their own people, we especially want this."
"The ugly attack directed at the Turkish flag was an incident which resulted from provocation by a handful of no-good, uninformed people. However it should be every nation's honor to defend the citizen's and diplomats of foreign nations. The Syrian administration must fulfill this duty.
Bashar Assad needs to see what sort of tragic ends have befallen those that have staged wars against their own people. I want to remind him: Prosperity cannot be gained through oppression. You cannot build a future on the blood of the oppressed. History remembers these types of leaders as having been nourished with blood. And Assad, you are headed towards opening that page yourself."
'IF YOU WITHDREW WHAT WOULD IT COST YOU'
The BDP, which was absent in the earthquake region Van, we are now seeing at funerals held for terrorists. Those who conduct politics for a bloody terrorist organization should know that the bloodshed in every inhumane incident conducted by the terrorist organization is also on the BDP's hands, just as much as it is on the hands of the terrorist organization.
Put distance between yourselves and the terrorist organization. Break apart from being the terrorist organization's guardians. Like a boomerang, tomorrow this could come back at you. Do not continue to conduct politics behind a network of murders, conduct politics with your own volition. If you cannot find this will amongst yourselves, then learn a lesson from the mothers whose hearts burn as they lay beneath their sons' lifeless bodies in Diyarbakır.
An order came down from the mountain. Now what are they saying? Should we withdraw from the Assembly or not? If you withdrew what would it cost you and if you didn't then what would it cost? We have done all that we can in order for you to have a space in parliament. If you work, it would add color to the parliament. If you do not work, then nothing would happen. The parliament would still operate. You go ahead and calculate where you are going from here. What's the deal, that they have parliaments in Diyarbakır? What sort of nonsense is this? You need to know this well: In this country we will never allow for such structuring to be established."