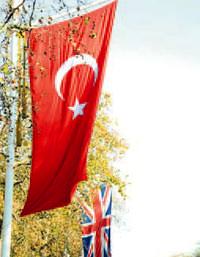 President Abdullah Gül said on Sunday Turkey was determined to overcome opposition to its bid to join the European Union before beginning a visit to Britain that underlines the growing political and economic ties between the two countries.

Gül's visit to London, where he will be a guest of Queen Elizabeth, symbolizes Britain's push for closer links with emerging markets such as Turkey.
Britain hopes that increasing trade and investment with fast-growing economies such as Turkey will boost the British economy's anemic recovery from recession at a time when key trading partners in the euro zone are mired in a debt crisis.
Britain supports Turkey's bid to join the EU. The two countries also increasingly see eye-to-eye on how to handle Syrian President Bashar al-Assad's crackdown on protests, with Turkey threatening sanctions unless the bloodshed stops.
Gül, who arrived in Britain later on Sunday for the first state visit by a Turkish president in 23 years, said in an interview with a British newspaper published on Sunday that Turkey was determined to join the EU despite the euro zone crisis and could become the bloc's economic "growth engine".
He rejected concerns that the economic problems facing the euro zone meant that any further expansion of the 27-member EU should be put on hold.
"Some people who think in a narrow scope and who do lack a strategic perspective consider Turkey's membership a burden," Gül told Britain's Sunday Telegraph.
"But those who can think 30 years, 60 years ahead, and who can think about the changing trends in the economy and the changing centers of power, can understand how much strength Turkey can bring to the existing strength of Europe."
Gül is likely to repeat that message on Monday when he addresses the annual conference of the Confederation of British Industry, Britain's main employers' group.
STATE VISIT BEGINS ON TUESDAY
Gül's state visit, sprinkled with banquets, parades and ceremony, formally begins on Tuesday when he holds talks with British Prime Minister David Cameron, who visited Turkey last year. Cameron set a goal of doubling British trade with Turkey, then worth around $9 billion a year, over the next five years.
EU countries agreed unanimously in 2005 to start talks with Turkey with the goal of full membership.
However, French President Nicolas Sarkozy is opposed to Turkey joining and German Chancellor Angela Merkel says she favors a "privileged partnership" for Turkey.
Gül said Turkey's booming economy, which grew 11 percent in the first quarter of 2011, could give Europe a shot in the arm.
"Consider the potential that Turkey has: Turkey's position, her assets, the value she can add in terms of energy resources, her population, the dynamism she can bring into Europe, and also the growth that she can bring, with Turkey being the engine of this growth."
He said Turkey viewed the euro zone crisis as a temporary situation. "We approach the negotiations with a strategic vision, and are very determined."