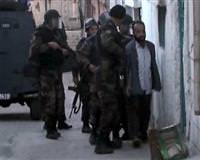 The men were arrested at several addresses across the city of Konya, 250 km south of Ankara, on suspicion of being members of Al Qaeda.
The suspects detained were taken to the Konya Numune Hospital where they underwent medical check-ups. The operation is stated to be ongoing and more arrests may follow. The suspects were later transferred to the Anti-Terrorism Department.