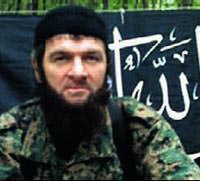 Russia's most wanted Islamist insurgent Doku Umarov warned he was willing to take measures to prevent the future killings of North Caucasus militants on Turkish territory, following the murder of three Chechens in İstanbul earlier this year.

Russian investigators have said two of the men who were killed in a pious Istanbul neighbourhood while walking from Friday prayers at a local mosque in September are suspected of being involved in a Moscow suicide bombing that killed 37 people in January.

Umarov claimed responsibility for the suicide bombing at Moscow's Domodedovo airport that killed 37 people in January, as well as the twin metro attacks last year that killed 40.

The third man, Berg-Hadj Musayev, had close links with Umarov, himself, according to insurgency-affiliated website kavkazcenter.com, which reported Musayev had travelled to Turkey for medical treatment after being wounded in fighting with Russian security forces.

"I appeal to you and encourage you to take measures to prevent these wicked people from encroaching on the lives of your fellow Muslim brothers from the Caucasus," said Umarov on a video posted on Kavkazcenter. The video had no date on it, but an English-language transcript was released on Sunday.

"If you are unable to take such measures, then, God willing, with God's help we will take necessary measures ourselves," he said, speaking in heavily accented Russian sitting in the forest clearing. It was not clear what he or his sympathisers would do.

In 2009 three former Chechen commanders were also killed in İstanbul.

Many Chechen families have found refuge in Turkey in the aftermath of two wars that Russian federal forces waged against separatists since 1994.

Those wars have fed an Islamist insurgency that Moscow is currently grappling with in its North Caucasus region. Militants led by the Chechen-born Umarov, aims to create a separate Islamic state across the region.

The United States has offered a $5 million reward for information leading to his arrest.