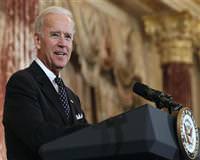 U.S. Vice President Joe Biden travels to Turkey this week amid deepening concern over Syria, before visiting a new Greek leader battling a debt crisis that could unravel the euro zone and sink the U.S. recovery.

U.S. Vice President Joe Biden flies into Ankara on Thursday with a range of hot-button topics to discuss including the eight-month crackdown on pro-democracy protests in neighboring Syria and the future of Iraq after U.S. troops leave by the year's end.

Tony Blinken, Biden's top foreign policy adviser, said in addition to discussing the turmoil in Syria and Turkey's strained relations with Israel, the vice president would also talk about the fight against the PKK terrorist organization, who he called a "common enemy" of Turkey and the United States.

Biden will meet in Turkey with Prime Minister Tayyip Erdogan and President Abdullah Gul. Aside from those talks the main public event of his trip is a Global Entrepreneurship summit in Istanbul on Saturday, which the United States hopes will promote a merchant class that can help deliver economic and political change in the Arab world.

"This summit really comes at a critical moment in the Middle East and North Africa. We've seen that millions of people have been calling out for not only political freedom but also economic opportunity," Blinken told reporters.

The Obama administration has placed a premium on close ties with Turkey -- a NATO member on a vital frontier between Europe, Asia and the Middle East -- and Biden's trip comes at a time of tumult in the region after the Arab Spring.

Turkey, a former friend but now a sharp critic of Syrian President Bashar al-Assad, said last week it was ready to take action with Arab powers if he fails to take steps to end a bloody crackdown on pro-democracy demonstrators.

"There has been a sea of change in U.S.-Turkish relations over the last eight or nine months that has been really remarkable," said Ross Wilson, director of the Atlantic Council's Dinu Patriciu Eurasia Center and former U.S. ambassador to Turkey.

"They are in sync on the Arab Awakening in general and especially on Syria ... in a dangerous region, their alliance with the United States looks much more important," he said.

Iraq will also be a key topic, with Washington hoping that Turkey's close diplomatic and economic ties with Iraqi Kurds will help to provide stability after U.S. troops have left.

Biden will travel on Sunday to Athens, where he will deliver symbolically important support to Greece's new Prime Minister Lucas Papademos. He will also meet with President Karolos Papoulias and the leaders of the two largest Greek political parties.

Papademos, a former central banker, was sworn in this month and aims to steer Greece out of a devastating debt crisis that could unravel the wider euro zone and tip the United States back into recession.

"The United States recognizes the sacrifices being made by the Greek people as they pursue this reform process," said White House economic adviser Mike Froman. But he made clear that Biden was not bringing additional financial support beyond the European Union/IMF package already in place.

Washington says the Europeans have the resources they need to shore up their banking system and bail out Greece, and protect Spain and Italy from speculative attack. So Biden will go to Athens with warm words but no actual resources.

"We have really no ability to change any of the dynamics of the debt crisis, or how the Europeans are going to resolve this one way or another," said Heather Conley, senior fellow at the Center for Strategic and International Studies. "So other than a lot of encouragement ... we just don't have a role here."

There are other issues to discuss, including Cyprus and the need to keep tensions in check around oil and gas exploration in the Eastern Mediterranean, where Cyprus plans to issue exploration licenses in defiance of Turkey. But the debt crisis is likely to dominate the visit.

"Politically, there is just very little space in Athens for anything but the crisis," Conley said.