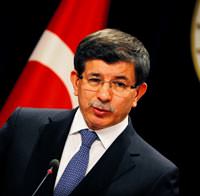 Turkish Foreign Minister Ahmet Davutoğlu told a news conference that Turkey, Syria's largest trading partner and a rising Middle East power, will also block delivery of all weapons and military equipment to Damascus as part of measures aimed at persuading Assad to end a crackdown on protesters. Senior officials in Assad's administration and business people who have provided strong support to the government will also be banned from travelling to Turkey. Davutoğlu said Turkey would also consider taking additional measures in the future. A Foreign Ministry official said the sanctions would come into effect immediately.
The move by Turkey, once a close friend of Syria, piles further pressure on Assad and comes after the Arab League announced economic sanctions against Damascus. Washington praised Turkey's actions and urged other governments to follow suit. "The leadership shown by Turkey in response to the brutality and violation of the fundamental rights of the Syrian people will ... send a strong message to Assad and his circle that their actions are unacceptable and will not be tolerated," said White House National Security Council spokesman Tommy Vietor in a statement.
"ADDITIONAL MEASURES"
Davutoğlu said all relations with Syria's central bank were being suspended and that a cooperation agreement with Syria was being halted until there was a new government in place. "Until a legitimate government which is at peace with its people is in charge in Syria, the mechanism of the High Level of Strategic Cooperation has been suspended," Davutoğlu said, adding Assad's government had come "to the end of the road".
As part of the nine-point sanctions list, Davutoğlu also said Turkey would stop all transactions with the Commercial Bank of Syria except for existing transactions and would halt all credit agreements signed with Eximbank to finance Syrian infrastructure projects. In imposing these sanctions, Davutoğlu said Ankara had taken "meticulous care" to not inflict suffering on the Syrian people because of the mistakes of the government. "We will also evaluate additional measures that we can take after this, depending on the behavior of the Syrian government, with the same meticulousness," he said. Ankara has always stressed it was against imposing sanctions in principle and that these should never harm ordinary Syrians.
Turkish President Abdullah Gül, speaking after Davutoğlu's announcement, said Turkey was moving "extremely carefully". "Basic and vital human needs such as water or electricity will definitely not be included in these measures," Gül said. Turkey has also said civil aviation by Turkish Airlines to Damascus will continue.
Davutoğlu said Turkey would continue to stand by the Syrian people during this "difficult period". "Our desire is that the Syrian government realizes the only way out of this dead end road that they have entered is to immediately meet the legitimate demands of the people and to end the violence and repression against the civilian population," he said. "We wish success to the Syrian people in this legitimate struggle."