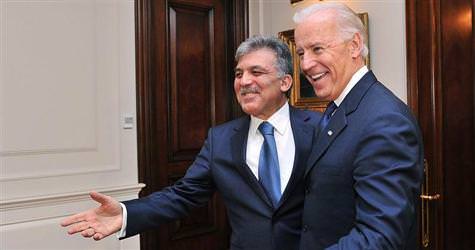 Joe Biden, who arrived to Ankara late last night on an official visit, flew to Istanbul today in the Air Force Two aircraft. Biden and his accompanying committee were sent off from the Ankara Esenboğa Airport by Ankara's Deputy Governor Mehmet Ali Ulutaş. Prior to boarding the plane, Biden waved to the members of the press before giving them a military salute.
Today in Ankara, Joe Biden met with Speaker of the Parliament Cemil Çiçek over breakfast and then paid a visit to the Atatürk Mausoleum. Biden, who also met with President Gül, will be attending the Global Initiative Summit in Istanbul and is expected to meet with the Greek Orthodox Patriarch Bartholomew.
Arriving to Turkey from Iraq, after conducting his scheduled meetings in Istanbul Biden will move on to Greece and will return to the United States on December 5th.
Biden's Words in the Mausoleum Guest Book
Visiting the Atatürk Mausoleum this morning, Biden wrote the following in the Guest Book:
"On behalf of the United States, I would like to present my deepest respect in memory of the founder of the Turkish Republic Mustafa Kemal Atatürk. While throughout the world people in administrations are struggling to obtain greater shares, they could be inspired by the effects of Atatürk's emphasis on democracy in Turkey's development. A dynamic Turkey is living out the words of Atatürk delivered to his citizens in the tenth anniversary speech in which he said, 'We can never consider our accomplishments as being enough, because we are obliged and determined to do further and greater things. These final words should be inspiration for all of us."