Our weapons will not make their way to the PKK 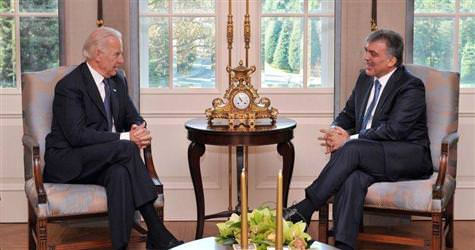 During a meeting with President Gül, United States Vice President Biden praised Turkey by stating, “There is no other example like you” and offered assurance on the PKK by stating that even if they withdraw from Iraq they will not allow for a void in security. Biden assured that weapons would not make their way to the PKK and that Iraq will be a safer place.

For the first time ever during a single four-year administration period, Ankara has hosted both the U.S. President and Vice President. During President Barack Obama's visit, he called Turkey 'a model country'. During Vice President Joseph Biden's stay he pointed out Turkey's role in the Arab Spring's demands for freedom and democracy and stated that Turkey provides a historical example.
Biden's meeting with President Abdullah Gül, which was scheduled for just one hour, went on for two hours yesterday. Having arrived from Iraq, Biden offered assurance to Gül regarding the struggle against the PKK. Biden stated that even if they withdraw from Iraq, they will not allow for a security lapse. Biden also stated that the PKK will not obtain any weapons and assured that Iraq will be a safer place.
SABAH provides the following details on Biden's meetings in Ankara:

1. IRAQ
THERE WILL NOT BE A VOID: After relaying information on his time in Iraq, Biden stated that the U.S. would not allow for a void to develop due to the United States' military withdrawal and assured that they would not allow for the stability they established in Iraq to be harmed. Biden also assured that they would continue to provide support in the struggle against terrorism by tracking weapons as well as through training Iraqi security forces.
WE WILL NOT EVADE AN OPERATION: Gül thanked the U.S. for their efforts in expediting the transfer of the predators and cobra helicopters from Iraq to the İncirlik base. Gül also delivered the messages that if necessary, Turkey would not evade a long-term operation. "It is impossible for us to accept what this organization has done. If they repeat what they have done thus far and should they persist through gaining strength from Iraq, then we will not avoid responding even further than we have already."
2. ARAB SPRING
THERE IS NO OTHER EXAMPLE LIKE YOU: Underlining the influence of the Turkish model on the Arab Spring, Biden stated the following: "Turkey's stance is very important for the Arab Spring. Our position in regards to Syria is 100 percent in congruence. We, as the United States, would never say 'your way of ruling should be this way', however our concern is that the public's demands are met. President Obama and I closely follow Turkey's and Prime Minister Erdoğan's announcements on Egypt, Libya, Tunisia and most recently Syria. Your stance is in favor of the public's demands and this is an exemplary move. In any case, there is no other example such as Turkey. You have proven this fact through your policy."
THERE IS NO ROOM LEFT FOR AUTHORITARIAN REGIMES: President Gül expressed that the Arab Spring was inevitable, "There is no longer any room left for authoritarian or single-party regimes. The affects of Arab Spring will be evident as it continues to spread each day. A transformation in the Muslim world is inevitable."
3. ARMENIA
STRENGTHEN OUR HAND: Biden expressed that it was also a discomfort to himself that the so-called genocide draft is brought up in the U.S. Congress every year. "If there is any advancement on the implementation of policies , it would be very helpful to this administration, and would strengthen our hand."
IT CANNOT BE ONE-SIDED: President Gül reminded that Turkey remained loyal to the protocol signed however it was Armenia that put the process on hold through a ruling by the constitutional court. "Protocols are not one-sided. We are waiting on them to take a step. We do not want to continue relations with our neighbors in this manner."
When asked by U.S. journalists whether Biden had a message on Syria, the Vice President responded by stating, "I didn't come here to deliver a message; I came to discuss with friends our mutual interests."
U.S. Vice President Joseph Biden will be paying a visit to Prime Minister Erdoğan in his residence, as the premier is recovering from recent surgery.