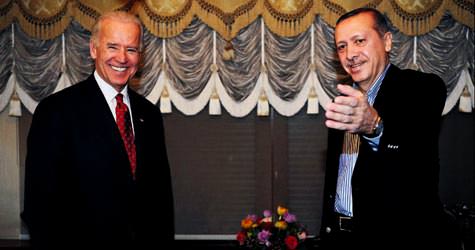 Turkish Prime Minister Tayyip Erdoğan’s health problem appears to have been "nipped in the bud" by a recent operation and he expects to be back at work soon, U.S. Vice President Joe Biden said on Sunday en route to Athens. The two met to discuss a number of matters including Iraq.

Biden, who met the Turkish leader for two hours on Saturday, has seen more of Erdoğan than Turks have in public since he underwent keyhole abdominal surgery on Nov. 26. "He looked to me good, his stamina was real," Biden told reporters travelling with him aboard Air Force Two from Istanbul to Athens on Sunday. "I got the distinct impression that this was something they've nipped in the bud, they've taken care of," he said. "I saw no flagging...I had a very positive impression. He thinks he is going back to work relatively soon."
According to a high level U.S. official, over half of the meeting between Prime Minister Erdoğan and Vice President Biden was focused on Iraq, while time was also spent discussing the PKK, Syria, Iran, Turkey-Israel, Cyprus as well as the new constitution process. When briefing journalists travelling with Biden, the official also stated that they had heard that Erdoğan does not generally hold official meetings in his residence, and that they considered his invitation to be a 'very warm-hearted gesture'. The meeting, which was supposed to have lasted no longer than 45 minutes, went on for two hours. Biden said Erdoğan had shown no sign of tiredness and kept going despite a doctor sending notes in to the room for him to wind up the meeting.
The American committee took off their shoes and donned slippers upon entering the Erdoğan residence, when Erdoğan began introducing Biden and his committee to his family members. According to the official, Erdoğan stated that he had listened to and enjoyed Biden's speech at the Global Entrepreneurs Summit. Erdoğan also stated that he appreciated Biden's affirmative words regarding U.S.-Turkish relations as well as on the advancement noted on Turkey's economy. Later, Erdoğan requested Biden tell him about his trip to Iraq. Biden proceeded to relay detailed information on his trip to Iraq, which they ended up discussing for almost half of the meeting. Biden emphasized that the United States is not breaking ties with Iraq and that quite the contrary they are developing further ties as the transition from military leadership to civilian leadership transpires. Biden also stated that the influence of Iran on Iraq is exaggerated and that Iraqi's are not fond of the notion of external intervention, especially from Iran.
THE PKK ISSUE
The issue of the PKK terrorist organization was also discussed during the meeting. Biden pledged close support, as the U.S. administration, in fighting the PKK. Biden also relayed that when in Iraq he heard that they, including the northern regional administration, were serious in the struggle against this joint issue of Turkey's, Iraq's and the United States'.
When asked, "Was the question of how the predators which have been transferred to the İncirlik based will be used brought up? Did Biden say anything to Prime Minister Erdoğan regarding operations on PKK camps in Northern Iraq?" The official stated, "I will not go into any further details other than stating that Biden expressed the United States' commitment to Turkey's struggle against the PKK. Biden also stated that of course sovereignty is very important for Iraq and that on both a national level as well as especially for the regional Kurdish administration every step towards exerting pressure on the PKK was of utmost importance."
When asked, "If Turkey's operations in Northern Iraq continue, will this create a problem in terms of establishing stability in Iraq?" The official answered, "To effectively handle the PKK issue and to ensure that Turks experience no more violence as well as other problems is to everyone's advantage, the Iraqi national government, the regional government as well as Turkey."
PRESSURE ON IRAN
In regards to Iran, Biden stated that their influence in the region was decreasing while their isolation increases. Biden used the examples that Iran is not paying heed to agreements established in order to prevent Iran's spreading of nuclear weapons as well as their refusal to acknowledge their obligation to the international community regarding their nuclear program and also mentioned the cases regarding the attack on the British consulate in Tehran and the assassination plan of the Washington Ambassador in Saudi Arabia as all being incidents that increase the isolation of the Iranian regime in the region. Biden drew attention to the fact that as a result, right now the international pressure exerted on Iran was the 'largest coalition in recent history."
When asked if Biden called on Turkey to issue tougher sanctions? The official stated that Biden noted that sanctions were having a demonstrable impact on Iran and the best way to hope to change their behavior ... (was to) sustain that pressure." The official said that Biden expressed that Turkey has also joined in these sanctions and that this was important, however there was no "specific discussion of sanctions".
According to the official, Syria was also discussed briefly. Biden stated that Syrian State Leader Assad's attack on his own public was a problem and led to instability and that the international consensus that Assad must step down continued to increase. The official also noted that Turkey was a leading actor in establishing this consensus.

TURKEY AND ISRAEL
During the meeting, Biden also mentioned the matter of Turkish and Israeli, relations. Biden brought up their hope that the tension between the two nations would be overcome and they are constantly seeking out opportunities to improve relations. Biden stated that the fact that the United States' two close friends and partners were not getting along was of course upsetting.
SHOPPING FOR CHEESE AND OLIVES
Before departing Turkey, U.S. Vice President Joe Biden went shopping in Fatih's Samatya Square. Biden left the Hilton Hotel at around noon yesterday and went shopping in Istanbul, where heavy security measures were in place. Biden first stopped at the mussels shop and then went on to buy Turkish Delight. He greeted the clerks and chatted with the Samatya butcher. Later he went on to the Mevsim Manav where he bought quince, pomegranates, bananas apples and Washington oranges. Green grocer Sadık Öztürk did not accept the Turkish liras Biden extended and in return Biden gifted him a pin. Biden also bought cheese, black and green olives from Bursa and honey from Malatya.
PISTACHIO KEBAB WAS A FAVORITE
Afterwards, U.S. Vice President Biden enjoyed lunch at Develi Restaurant where he had a menu consisting of mezes, stuffed meatballs, fındık lahmacun, pistachio kebab, eggplant kebab, alinazik kebab, hummus with pastrami and baklava. Restaurant owner Nuri Develi stated, "It is a great honor for us that he chose to eat here. We presented him with our regional cuisine. He said that they were all delicious, however he complained about gaining weight and did not eat very much." Biden signed the guest book, thanking the restaurant for the meal and stating that he hoped to come back again. Completing his trip to Turkey, Biden moved on to Greece.