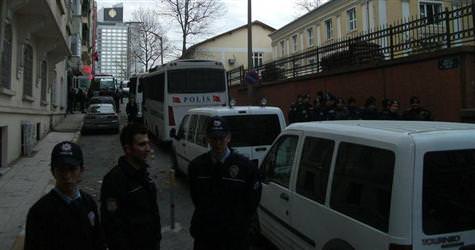 While a number of riot police have been dispatched to the site, police are also preparing to intervene. According to the information obtained, the Libyans that are occupying the consulate had been brought to Turkey for medical treatment.

THE GROUP HAD ALSO WANTED TO ENTER THE ANKARA EMBASSY
It turns out, the group of Libyan nationals, who were receiving treatment in Turkey, had wanted to force their way into the Ankara embassy because they were left here without any money. The group of Libyans attempted to break through the embassy barriers when police intervened using pepper spray.
The group of approximately 20 Libyans had been wounded in the internal strife in Libya and had been brought to Turkey to receive medical treatment. However, supposedly when they ran out of money the embassy did nothing to aid them, which was the drive behind their intentions to ambush the Libyan embassy.
When embassy staff refused to permit the Libyans entrance, they attempted to force their way in. The group attempted to forcibly cross the embassy barriers, creating a frenzy and harming cars in the vicinity, which led to police being forced to use pepper spray. The Libyan group was contained when police forces intervened and they tried to wash their faces with water and even coke to diffuse the effects of the tear gas. The group continued to argue with police and when additional security forces teams arrived to the scene they began to stage a seated protest in front of the embassy. While three people from the group remained in an attempt to speak with officials, the remainders of the group dispersed.