Conflict erupted on the Syrian-Turkish border 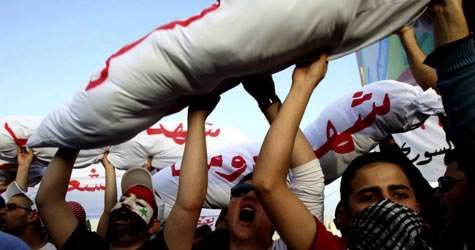 Syrian border guards blocked an infiltration attempt from Turkey by about 35 “armed terrorists”, the official Syrian news agency SANA said on Tuesday, as Syria forces battle a growing threat from army defectors and rebel fighters. Meanwhile, according to officials from the Homs State Hospital, the number of bodies brought in over the past 24 hours has surpassed 50 and the majority of those brought in had been tortured.

SANA said some of those who came over the border were wounded and escaped back to Turkey where they received aid from the Turkish army. The wounded were transported in Turkish military vehicles, SANA said.

Relations between Syria and Turkey have disintegrated since the government of President Bashar al-Assad began using force to suppress a popular revolt.

Turkey has said a buffer zone may be required on its 900-km (560-mile) border with Syria if the violence causes a mass exodus of Syrians fleeing the cities.

A rebel Free Syrian Army of defectors and Assad opponents is believed to be smuggling fighters and weapons into Syria from Turkey to launch attacks on Assad's forces.

"The border guards forces suffered no injuries or losses. They warned they would stop anyone who even thinks of touching Syria's security or its citizens," SANA said.

The agency earlier reported the funerals of seven army and police members killed in fighting with armed rebels. Syria says the latter are "terrorists" organised and financed from abroad.

Clashes erupted on Tuesday between army defectors and security forces in the town of Dael in southern Deraa province, the activist Syrian Observatory for Human Rights said.

"There were raids and arrests ... and random gunfire and stun grenades exploding to terrify the people," it said. All phone lines and mobile phone connections were cut off.

DIPLOMACY STALLED
What began nearly nine months ago as a peaceful protest against Assad, inspired by the Arab Spring in Tunisia and Egypt, has slid closer to civil war as armed opposition groups organise and protect city districts.

The United States, the European Union, Turkey and Jordan have called on Assad to step down in order to bring the violence to an end and permit democratic elections for a new government in Syria, where the Assad family has ruled for 40 years.

At least 4,000 people have been killed in the unrest, according to the United Nations. About a quarter of them were from the security forces, according to activists.

Diplomatic efforts to resolve the crisis have stalled and Syria is now the target of international economic sanctions and a travel ban on VIPs close to the regime.

Syria has said it may sign up to a peace plan by the 22-state Arab League which calls for forces to be withdrawn to barracks and Arab observers allowed into the country.

But it says, as a precondition, the Arab League would have to revoke economic sanctions it imposed earlier this month and unblock Syria's frozen membership of the League.

U.S. Secretary of State Hillary Clinton was due to meet members of the opposition movement for talks later on Tuesday in Geneva, her second meeting with Assad's opponents since the unrest began in March.

She will meet Syrian National Council leader Burhan Ghalioun, who has said the a post-Assad Syria would align itself with the Arab League and the Gulf, and end its special relationship with Iran and the Lebanese movement Hezbollah.