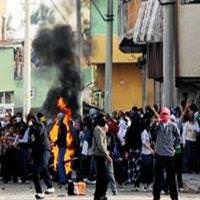 An indictment has been issued against a juvenile who injured a police officer last September by throwing a Molotov Cocktail, only to repeat the offense one again, stating “this time I’m going to kill you.” The indictment requests Ş.B. be charged with 20 years for “conspiring to burn someone to death.”

The latest link in a recent chain of rulings on incidents involving Molotov Cocktails, has transpired in Adana.
The Adana Public Prosecutor has prepared an indictment involving two minors that are being charged with 'conspiring to burn someone to death' and for 'staging an armed attack on an officer on duty.' According to the indictment, 15-year-old Ş.B. threw a Molotov Cocktail at a police officer for the Şakirpaşa Police Department in May, 2010. The police officer was wounded in the attack. Meanwhile, while the investigation into the incident was still ongoing, on September 30th, 2011 a group including Ş.B were pestering students at the Şakirpaşa Elementary School. The situation was reported to the police and the same officer that had been wounded prior was a member of the team dispatched to the school. At this point, Ş.B. insulted the police officer by stating, "I hurt you before, but this time I'm going to kill you." Ş.B. proceeded to return approximately ten minutes later, holding a Molotov Cocktail which he used to attack the police teams, however luckily they missed and the explosives burst into flames on the ground.
Police from the Juvenile Department arrested Ş.B. on November 18th. The prosecutor working on the investigation has written up an indictment requesting a 20 years sentence for conspiring to burn someone to death, a three years sentence for attacking an officer with a weapon and a one year sentence for 'insulting'.
OVER THE PAST THREE WEEKS…
November 14th: Police Chief requests firing authority
Adana Police Chief Mehmet Avcı stated that Molotov Cocktails should be referred to legally as liquid bombs and if necessary firearms should be used against a perpetrator intending to set off a Molotov Cocktail. "This is a very special bomb that can't be done by just anyone. These bombs can lead to deaths, and the burning of homes and businesses. Police forces shoot be granted to shoot on sight, otherwise we will continue to suffer further.
November 27th: Court rules as 'weapon' and sentences to 12 years
The Van 4th High Criminal Court sentenced two suspects found with four Molotov Cocktails and fireworks used to create Molotov Cocktails to 12 years and six m months each for 'providing weapons to a terrorist organization.'
This was the first time that a Molotov Cocktails was categorized as a 'weapon'. The court used the example of the November 2009 Molotov Cocktail attack on a public bus in Istanbul which resulted in the death of Serap Eser, a senior in high school, in order to display the significance of what the consequences can be.
December 1st: 'Molotov throwing-child to be removed from family's care'
Diyarbakır Governor Mustafa Toprak stated that the 5395 Juvenile Protection Code which deals with minors charged with throwing stones or Molotov Cocktails at police officers, will soon be implemented. "We will be taking these children from their families and placing them in juvenile homes." Expressing their determination to bring an end to the juvenile problem in Diyarbakır, Governor Mustafa Toprak explained that they would be working with the Social Services District Department and the Police Department's Minor's Department to first issue a warning to parents and to secondly issue a fine. "If the activity persists despite all of these measures, then with a court ruling, we may remove the minor from their family and place them in a 6-7 person juvenile center."