Sixteen days of action against gender based violence 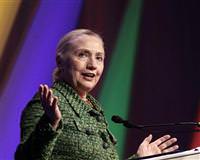 ‘Each year, on the days between November 25, the International Day for the Elimination of Violence Against Women, and December 10, International Human Rights Day, we undertake 16 Days of Activism Against Gender Violence. During this time, we commit ourselves to speaking out about violence against women and girls and improving the protection and participation of women worldwide. We need everyone’s involvement - boys and men, faith and community leaders, youth, and people at all levels of society are critical to solving such a widespread pandemic of violence.’

The following is an articled penned by U.S. Secretary of State Hillary Clinton on gender based violence which she has submitted to SABAH as well as a number of other influential international newspapers.
Picture a woman. She might live anywhere in the world. She could be part of any socio-economic group, of any ethnicity, of any religion.
In the developing world as in Australia, the effects of violence against women flow on to families.
On a typical day this woman starts her day before the sun rises. She works for 8-12 hours in a store or on a farm or at a factory or in someone's home for a small wage, but her children and elderly relatives depend on her income for survival.
When she comes home, she asks her children what they learned that day at school and what they want to be when they grow up. She spends hours bent over a small stove or fireplace preparing meals for an extended family. In many parts of the world, she also grows the food that feeds everyone at her table.
Now picture what happens when that woman is unable to do any of these things because she has experienced gender-based violence.
The cost of her medical care further strains her family's tight budget. If she can no longer work or care for her children due to physical or psychological injury, her children drop out of school and take jobs to support their family. The local shopkeepers she did business with lose a customer, and their incomes also go down.
Chances are you recognise this woman.
One in three women around the world experience some form of gender-based violence; one in five will experience rape or attempted rape. It may come early in life when a mother is forced to end a pregnancy because the child is female, or when families refuse to educate girl children, or when boys receive two helpings at the dinner table before girls are allowed anything to eat. Later it may take the form of child marriage, domestic violence, or sexual exploitation.
In whatever form it takes, gender-based violence is an intolerable violation of human dignity. No one can quantify the personal pain and anguish of any form of abuse. But medical bills and legal costs, lost wages and lower productivity, health costs including an increased risk of HIV - these are things on which we can put a price.
And when we do, we see - in dollars and cents - how much violence against women and girls truly costs everyone in a society.
In Uganda, for example, almost 13 per cent of women reported time lost from crucial household work because of violence from an intimate partner. Some of these women lost as many as 11 paid working days each year. More than two-thirds of households surveyed in Bangladesh reported that domestic violence caused an average loss of $5 a month – nearly 5 per cent of many women's incomes. These costs are exacerbated in households where a woman is the chief or sole earner, and they are likely underestimated.
The damage is also passed on to the rest of the community through increased expenses for judicial action, health care, and security services. No country or region of the world is immune to these costs.
In the United States, a 2003 Centers for Disease Control study estimated that the cost of violence by an intimate partner alone exceeds $5.8 billion annually – nearly $4.1 billion spent on direct medical and health care services, and almost $1.8 billion in productivity losses.
Violence against women and girls is also an issue of international human rights and national security.
The consequences of widespread violence extend beyond the immediate injury or economic loss. There are often severe and lasting health outcomes such as sexually transmitted infections, and the social and psychological damage of gender-based violence affects survivors, their children, families, and entire communities.
But where violence and abuse keep women out of the workforce and drag down communities for generations, fostering women's economic participation grows national GDPs and personal incomes. One study estimated that lowering barriers to women's economic participation in emerging economies could raise per capita incomes as much as 14 per cent. Larger incomes mean more money to feed families, send children to school, and support local merchants and producers, igniting a virtuous circle of economic growth.
Abuse can happen in a family's home, on fields of armed conflict where rape is used as a weapon of war, or wherever girls are diminished and devalued simply because they are girls.
It is unacceptable in any form. Countries simply cannot progress when half their populations are marginalised, mistreated, or subjected to discrimination.
This year, let us use the 16 Days to renew once again our commitment to end the abuse that traps so many women and girls around the world. Let us call out the culture of impunity that perpetuates this cycle of violence. And let us work together, in partnership, to make all forms of violence a thing of the past.