A 'Mavi Marmara' waltz in Vienna 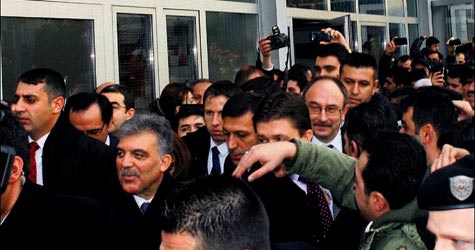 While in Vienna, President Gül continued to express his cold stance against Israel, which has yet to apologize for the Mavi Marmara incident by refraining from attending a lunch and family photo session where Barak was also present.

With relations tense following the bloody attack on the Gaza aid flotilla ship, the Mavi Marmara, the cold shoulder treatment between the two nations continued in Vienna. President Abdullah Gül's stance that relations will not normalize until Israel has issued an apology, continued in the sense that Gül paid special effort to avoid coming into any sort of contact with Israeli Minister of Defense Ehud Barak.
President Gül happened to be participating in the World Policy Conference held in the Austrian capital Vienna, in which Ehud Barak was also amongst the other invited leaders. When Gül heard that Ehud Barak would also be entering the historical Hofburg Palace, he made sure his stance following the Mavi Marmara raid was evident. Gül paid special care to ensure he did not enter at the same time as Barak. Gül also refrained from attending a meal held by Austrian President Heinz Fisher in honor of government leaders in attendance at the fourth annual World Policy Conference, when he heard that Barak would be attending. Gül also chose not to participate in a 'Family Portrait' for the very same reasons.
Despite Turkish officials having requested the guest list for Austrian President Fischer's luncheon days prior, they received it the night before the event only to see that Israeli Minister of Defense Ehud Barak had also been invited. As a result, President Gül decided not to attend the luncheon and instead went to a Friday prayer ceremony in Vienna, a city with a significant number of Turkish residents. Gül also refused to be a part of the 'family photograph' session of invited state and government leaders and was therefore not photographed in the same frame as Barak. Meanwhile, after listening to President' Fischer's address, Barak and his accompanying committee left the hall from the rear entrance prior to President Gül's speech.