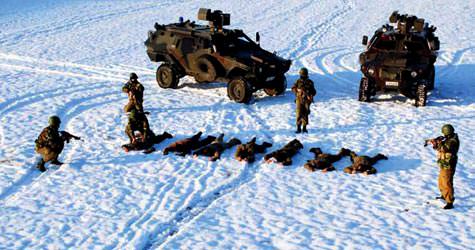 Photographs taken during a dawn raid staged in Bingöl’s Karlıova in which one PKK terrorist was killed and seven surrendered, depicts the manner in which the soldiers treat their terrorist captors. In one frame, a soldier hands over his jacket to a 15 year-old PKK member who was cold.

On December 8th Turkish Armed Forces conducted an operation on a cave where eight PKK members were hiding out in the rural region of the Sudurağı village, located in Bingöl's Karlıova district. One PKK terrorist was killed and seven surrendered in the operation which was held by Gendarmerie Special Operations Teams with cobra helicopters and BTR-80 armored vehicles. Yesterday the photos and details of the gendarmerie's dawn operation were shared with the press. The images depicted the items confiscated by security forces in the operation, which included an M-16 infantry rifle, seven Kalashnikovs, a Glock gun, a large transmitter used to communicate with the Kandil camp in Iraq, two smaller transmitters, a night vision binocular, chargers for the weapons as well as ammunition and bare necessities.
SOLDIER HANDS HIS COAT TO A PKK MEMBER
Photographs taken after the operation displays a soldier's compassion. The images display that initially the terrorists are laid on the ground as they are searched. Meanwhile, one of the soldiers gave his parka to a freezing 15 year old terrorist, who wasn't dressed sufficiently for the cold and snowy weather. Later, the soldier places his hand on the terrorist's knee in a manner of consoling and offering support. According to an announcement regarding the operation, the terrorists who surrendered were given medical check-ups by doctors.
PKK MEMBER KILLED WAS REGIONAL HEAD
During the operation, military teams called on the PKK members to surrender, however one terrorist responded by throwing a hand grenade. Nicknamed 'Serbest' (Free), the terrorist was killed in the ensuing crossfire. He was supposedly the terrorist organization's regional leader and had joined the PKK in 1999.
Out of the terrorists that surrounded, one whose code name was "Azad" had joined the organization in 1993 and was allegedly the assistant to the PKK's supposed 'Erzurum State Coordinator'. The terrorist is stated to have participated in seven separate attacks including the 1995 ambush on the Hakkâri Uzundere Gendarmerie Station Headquarters in which ten soldiers were killed in the line of duty.
The other terrorists who surrendered were also involved in a serious of attacks including the May 2008 rocket attack on a police car in Bingöl's Adaklı district, the August 2011 armed kidnapping of a village official and his wife also in Adaklı, burning heavy machinery on the site of a new police station, as well as other attacks on hydroelectric plant construction sites in the Karlıova and Adaklı districts, setting vehicles on fire as well as other kidnapping incidents. The group was supposedly preparing to stage an attack on high level soldiers.
Meanwhile, last week in Şırnak's Mount Judi, commanders spent two hours convincing three terrorists in a seven-story cave to surrender.