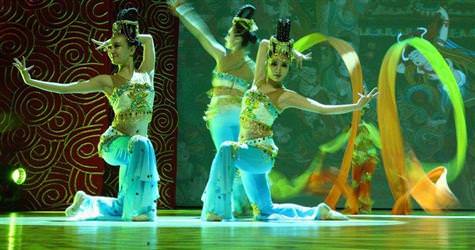 The ‘2012 Year of China’, which is aimed at developing the cultural ties between Turkey and China which span back thousands of years, kicked off in Istanbul with a gala event entitled ‘A new Message from the Silk Road’.

Held with the contribution of the Ministry of Culture and Tourism, the gala, held to commemorate the start of a year's worth of events aimed at bringing the Turkish and Chinese cultures together, was held at the Türker İnanoğlu Maslak Show Center. The evening hosted a series of shows by Chinese masters, including, dances, jugglers and musicians which was well appreciated by the wide audience in attendance.
The '2012 Chinese Culture Year' marks the longest and most comprehensive event held in Turkey celebrating the Chinese culture. Events held throughout the year will involve literature, art, cultural legacy, radio, films, education, acrobatics, and puppetry to name a few and will be held in Istanbul, Ankara, Izmir, Bursa, Antalya, Mersin, Trabzon as well as in other provinces dependent on the requests that come in. In 2013, China will be hosting its own series of events for 'Turkey Culture Year'.
Speaking after the show, People's Republic of China Consul General Zhang Qingyang emphasized that the events this year will work to further develop ties between the two nations. "Two strong nations with the world's most dynamic economies, will now be signing on to further collaboration both culturally and in diplomacy."
YEAR-LONG EVENTS HELD FOR 20120 CHINESE CULTURE YEAR INCLUDE THE FOLLOWING:
In January and February, events will be held to celebrate the Chinese 'Spring Festival'. In April there will be a Chinese Film Festival as well as a number of other events in conjunction with International April 23rd Children's Day.
From May to July there will be events for a day devoted to China at Istanbul's International Art Festival. In September, there will be a Chinese Modern Arts Exhibition and a Dunhuang Wall Paintings Exhibit. In October there will be events held to celebrate China and Turkey's National Day and December will be marked by the closing ceremony.