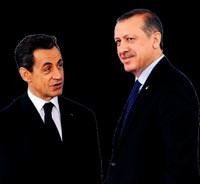 Prime Minister Tayyip Erdoğan told France on Saturday to study its own history rather than Turkey's in a warning against the French parliament passing a law making it illegal to deny Armenian allegations of a mass killing in the Ottoman Empire.

French President Nicolas Sarkozy, a major critic of Turkey's flagging bid to join the European Union, told Turkey in October that unless it recognized the 1915 killings, France would consider making denial a crime.
Erdoğan has already sent Sarkozy a letter warning political and economic relations would suffer grave consequences if the bill was passed into law and he reiterated the message at a news conference on Saturday.
"Those who want to see 'genocide' should turn round and look at their own dirty, bloody history," Erdoğan said after talks with Libyan National Transitional Council chairman, Mustafa Abdel Jalil.
The draft law, put forward by a deputy from Sarkozy's party, is due to go before parliament next Thursday and proposes a one-year prison sentence and 45,000 euro ($58,500) fine for denying the Armenian allegations.
"If the French National Assembly wants to take an interest in history let it take the trouble of illuminating what happened in Africa, in Rwanda and Algeria," Erdoğan said in his first address since recovering from surgery.
"Let it go and research how many people French soldiers killed in Algeria, how they killed them and what inhumane methods they used."
France is Turkey's fifth-biggest export market and sixth-biggest country from which it imports goods and services.
The French Foreign Ministry has stressed the draft law was not a government initiative.
Turkey has increasingly flexed its rising economic and political muscle on the world stage and in the Middle East as its economy continues to show strong growth while western Europe suffers a financial crisis.