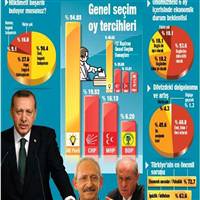 According to a survey conducted on 3,000 people by the Sonar Research Firm, if an election were held today, the AK Party would win 54.83 percent of the vote, followed by CHP with 19.52 percent and MHP with 16.13 percent of votes. While both the AK Party and MHP have experienced a rise in support compared to the June election, votes for CHP have dropped.

Noticed for their successfully accurate predictions of the June election outcome, Sonar Research Company has released the findings from a new survey conducted with 3,000 participants on today's political trends and economic expectations.
According to Sonar's research, the AK Party's 49.83 voter percentage in the June election has increased to 54.83 percent. The survey was conducted in 26 provinces and 30 villages, with 61.9 of those questioned being between the ages of 18-44. Out of those questioned, 50.70 percent were women and 49.30 men. When asked who they would vote for if an election were held today, 54.83 of the participants said they would vote for the AK Party, while 19.52 said they would vote for CHP and 16.13 percent said they would vote for MHP. Accordingly, while the AK Party has increased their voter rate by five points, the 25.98 percentage of votes acquired by CHP has dropped by 6.46 points. MHP saw an increase of three points compared to the 13.1 percentage results in the June election.
PESSIMISTIC ON THE ECONOMY
While 53.6 percent of the participants in the poll believe that over the next six months, the economy will be worse than it is today, 18.2 percent say it will be better. Those that foresee the economy being the same as it is now in six months' time made up 18.1 percent. These results portray a pessimistic picture in terms of perspective of the economy, especially when compared to figures from a September poll. Those that believe the economy will be worse than it is today, increased by 6.1 percent. Meanwhile, the number of those who believe the economy will improve, decreased by 7.97 points.
According to 72.7 percent of the survey participants, the biggest problem in the country is costliness. The number of those that stated unemployment and employment as being the most significant problem were at 63.6 percent. Those that stated terrorist events were the biggest problem in the nation were at 60.4 percent.
The survey also acted as a sort of report card of the government's success. A total of 50.4 percent of participants declared the government as being successful in general, while 27.6 found the government unsuccessful and 5.1 percent stating they were successful in measure. As a result, in comparison to Sonar's September survey, the number of participants that stated they did not find the government to be successful has dropped by 2.4 percent.
When asked whether the participants believe that the dollar and the euro will increase in value against the Turkish lira, 48.8 percent said yes and 45.6 percent said it would remain the same.