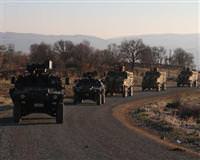 Troops have killed 21 PKK terrorists, including a regional commander, in southeastern Turkey during a large-scale operation now into its fifth day, security officials said on Wednesday.

The latest offensive comes after one of the deadliest summers in years for Turkish troops following an increase in attacks on security forces by PKK terrorists. The Turkish military launched the operation, involving some 5,000 Turkish troops backed by attack helicopters and warplanes, after identifying a group of around 30 PKK terrorists on Görese Mountain on the border of the Elazığ and Diyarbakir provinces.
On Monday, a senior military officer said 13 militants had been killed and five more wounded during the operation. On Wednesday security officials said the total number killed had risen to 21 and that the operation was still continuing. An alleged regional PKK commander, Huseyin Akdoğan, was among those killed and large amounts of ammunition and explosives belonging to the PKK were seized, the officials said.